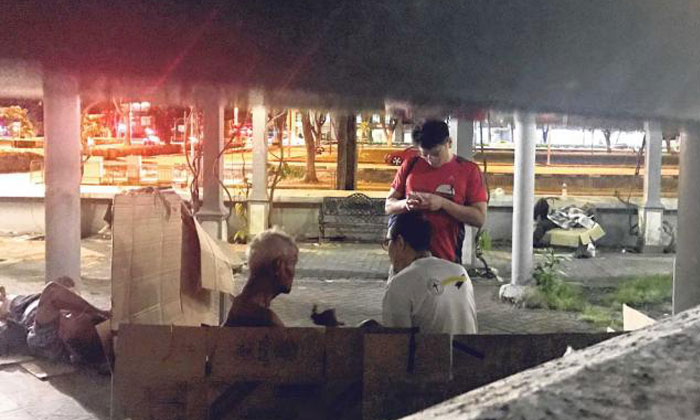 It used to be that vagrants would remain, unseen and unheard, at the margins of society. They bedded down in tents on the beach or slept on cardboard in the dark corners of staircase landings and void decks.

But a growing number is moving, literally from the dark to brightly lit and safer urban areas, say charity or volunteer groups that reach out to those who sleep outdoors, as more built-up spaces emerge and businesses operate round the clock.

Many are drawn, for instance, to eateries and supermarkets that are open 24/7, spending days and nights in the vicinity of the air-conditioned respite they offer.

The cavernous multi-purpose halls in Housing Board estates have also become a place to sleep without being disturbed.

Mr Iwan, 69, who declined to give his full name, spends his nights at such a location in Toa Payoh, lying down on a row of chairs borrowed from a nearby coffee shop.

He moved there after five years of sleeping in void decks in Ang Mo Kio, and two years in a tent in Changi before that, he said.

"It's cleaner here. The coffee shop uncle nearby is nice and doesn't complain about us," he said.

The term "homeless" generally refers to those who do not have permanent accommodation or are unable to use their registered address for various reasons.

Though their number has not gone up in Singapore, it has not receded either. From 2005 to 2015, the Ministry of Social and Family Development (MSF) gave support and shelter to an average of 300 individuals or families each year, similar to between 2013 and 2016, when 719 individuals and 467 families were given help.

It seems that the displaced will always form a part of society, and it is not hard to see why they gravitate towards places where there are more people.

Ms Fion Phua, whose group, Keeping Hope Alive, works with the elderly and homeless, said: "Some of them stay near brightly lit places to guard against theft or where there are toilets they can use.

"Those with illnesses may want to be around people so if anything happens, they are not alone."

Mr Abraham Yeo, of volunteer group Homeless Hearts of Singapore, said some may also wish to mask their homeless state.

"We are seeing more younger people, those in their 50s instead of their 60s and 70s, camping at Starbucks, McDonald's, Internet and gaming cafes, libraries and other urban spaces, as these are places where people hang out and it is not immediately obvious that they are homeless," he added.

Other reasons could be to evade the authorities, who look for them in the usual places to assess their situation.

Most who become displaced are poor and have weak social support. Three out of four were flat owners who sold their homes for reasons such as to settle debts, or after a divorce, and later could not afford to buy or rent another flat, said MSF.

The remaining quarter have fallen out with those they lived with for various reasons.

While businesses may look askance at having vagrants hanging about, some are also kind.

Mr Lance Ambrosio, who works at Bakery and Bar St Marc at Parkland Green in East Coast Park, said: "Sometimes, we give them leftover bread." There used to be more than 10 people who would sleep near the restaurant at night, but the number has dwindled to two or three, possibly because the authorities have been patrolling the area, he noted.

Mr Derrick Wong of the Longer Table Initiative, which distributes meals to the elderly in Chinatown, including those who sleep on the streets, believes the homeless should be engaged and not just ignored. Over the past few years, he has hired 12 to work at a cafe.

"Work therapy gets them out of their comfort zones and breaks the cycle of poverty," said Mr Wong.

"A lot of them want to earn a living and not go to a social service office to ask for cheques."

However, the idea of homeless people being in proximity with residents does not sit well with everyone. Madam Jesilyn Yeo, 53, a housewife who lives in Toa Payoh, said: "Some of them sleep and drink at the benches near our letterboxes. I smell the stench of urine when I collect my mail sometimes."

She said she reported them to the police and town council a few years ago but they keep coming back, so she now leaves them alone if they do not make much noise.

While it is hard to predict how Singaporeans would react to seeing more homeless people in their midst, it is a social trend that continues to evolve.

Associate Professor Irene Ng from NUS' Department of Social Work said: "There could be friction, but there could also be more public sympathy as homelessness becomes more evident ."

With social issues becoming more complex, flat sizes smaller and urban density rising, there may be more individuals choosing to leave their family homes, she said.

It is not illegal to sleep on the streets in Singapore. There are no specific laws governing the homeless here, though there are penalties for begging on the streets or being a public nuisance.

The homeless see "home" as more than just a roof over their heads, said Dr Neo. "It is about safety, stability and, most importantly, relationships with family or co-tenants. It is also about having a sense of control over your own life. Homeless people are not different from us. "