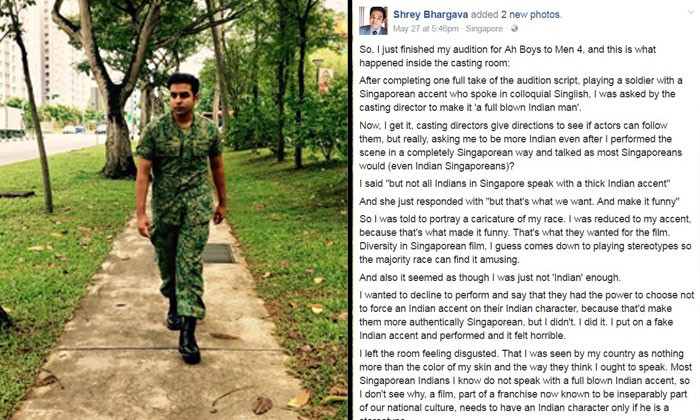 A actor was offended after he was told to act as a 'full blown Indian man' at an audition for Jack Neo's Ah Boys to Men 4.

According to a Facebook post made by the netizen, Shrey Bhargava, he was first asked to play a soldier with a Singaporean accent who spoke in colloquial Singlish.

He was then told by the casting director to make it a 'full blown Indian man'. In response to the request, the netizen said "but not all Indians in Singapore speak with a thick Indian accent," to which the casting director replied "but that's what we want. And make it funny."

"So I was told to portray a caricature of my race. I was reduced to my accent, because that's what made it funny. That's what they wanted for the film. Diversity in Singaporean film, I guess comes down to playing stereotypes so the majority race can find it amusing.

"And also it seemed as though I was just not 'Indian' enough.

"I wanted to decline to perform and say that they had the power to choose not to force an Indian accent on their Indian character, because that'd make them more authentically Singaporean, but I didn't. I did it. I put on a fake Indian accent and performed and it felt horrible."

He went on to say that films play an important role in shaping perceptions, and that it is not right to keep perpetuating stereotypes.

Netizens have remained divided as to whether Shrey should have done what he did given that he was auditioning for a character in a comedy.

Those in his camp have echoed his view that it was wrong to force an accent out of the actor.

"He is an Indian from Singapore not another country so why force the accent? Really, not all Indians speak like that in Singapore and I think everyone has to get over the fact that Indians speak like that lol and it's not about being an actor. If the character wants a Singaporean Indian then that's what you should give them! Come on guys some of the comments are really bad, Think about it from the person's shoes, in a world we are living in now, more kindness is needed."

"Well done my friend. You are courageous enough to stand up for right. Even that means that you gonna be marked. You have my respect. Don't worry about criticisms. Do not forget we are still a minority and the majority would still rule. There are few in the majority who are gonna support you for you stand."

Shrey however, has also been criticised vehemently by others.

She wrote on her profile:

"Singapore is built on meritocracy.

"Keep up your self victimizing charade and keep blaming society for your failures in life - you will find that soon nobody respects you.

"And unlike the white liberals who have been indoctrinated with white guilt since their school days and think they have to pay for their ancestors' crime, you will find Singaporeans way less susceptible to your guilt tripping. Asians, including Indians and Chinese alike, don't subscribe to victim-playing. We work hard and succeed despite the odds - I suggest you get on with the program. Nobody owes you or your race a level playing field. Your whining rings hollow, since you exist in one of the most racially harmonious countries in the world, where the government has taken careful steps to ensure equality for all the 4 main races."

Ah Boys to Men actor Maxi Lim also weighed in on the issue.

"You mentioned you put on a fake Indian accent, performed, felt horrible and left disgusted. There were times I knew I messed up an audition or perhaps felt unfair about certain requirements and left feeling not good. But did I take it all up online? This simply reflects your lack of professionalism and putting the race card into the picture is so wrong.

"Handle your insecurities Shrey, this isn't the first time I saw you posting on FB along the lines of "not deserving to feel like a foreigner in your own country". Don't mix your insecurities to this casting. Not cool. Stirring the feelings of other actors into the picture, that's worst man. I believe they are wise enough to see the bigger picture here."

For now, it remains to be seen how this episode will play out. As the Internet remains divided over the issue, we would like to hear your thoughts about the matter.

Let us know how you feel in the comments below.