Action can be taken against drivers for 'choping' parking spaces in public streets: LTA 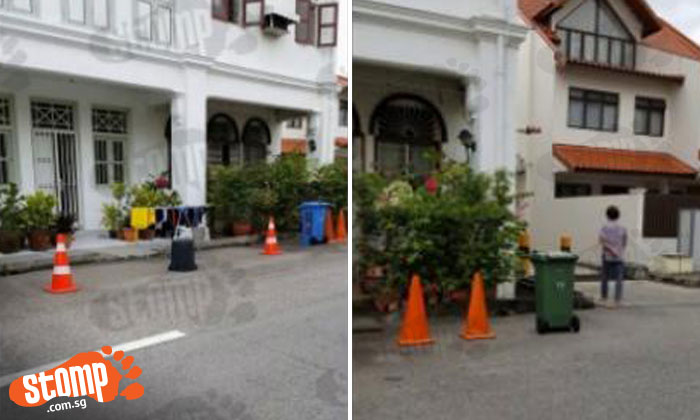 The LTA has responded to Stomp's query on whether drivers are allowed to reserve parking spaces for their own use.

On Wednesday (Jan 18), Stomper Chan saw drivers using bins and even a clothes hanger to 'chope' spaces in between parked cars along Cheow Keng Road.

There were shophouses in the vicinity, suggesting that the items might have been placed there by residents of shopkeepers.

Said an LTA spokesperson with regard to the actions of the driver(s):

"For such issues within the private estates, the Land Transport Authority (LTA) adopts a community approach towards resolving them by advising residents to ensure that their objects do not pose a safety hazard or an obstruction to other users.

"Under Section 32A of the Street Works Act, LTA is empowered to enforce against any person(s) for placing articles or things on public streets and five-footways, which may cause obstruction and/or inconvenience to the passage of the public."

On Jan 18, another Stomper also sent Stomp a photo showing an orange cone placed in front of an empty parking lot at Ubi Avenue 1 he saw at 8.30am. He reported that he has been seeing that happening for more than three months.

In a telephone interview and WhatApp message, the Stomper told Stomp that the lot was reserved by a BMW driver who owned a shop nearby.

The HDB has released a statement saying that such practices are not allowed.

"Motorists are not allowed to reserve parking lots by placing items on or in front of a car park lot. Offenders can be issued a fine.

"Prior to this STOMP post, HDB had not received feedback about the “reservation” of parking lots at Ubi Ave 1.

"We are investigating the feedback and have also stepped up enforcement in the car park. Action will be taken against motorists who infringe the parking rules.

"Members of the public may call HDB’s Enforcement Hotline at 1800-272409 to report any illegal or indiscriminate parking in an HDB car park."

Share with us your experiences with such drivers at stomp@stomp.com.sg or via WhatsApp at 9384 3761