Able to help 'ninja' you away from annoying relatives: Another S'pore guy up for hire this CNY 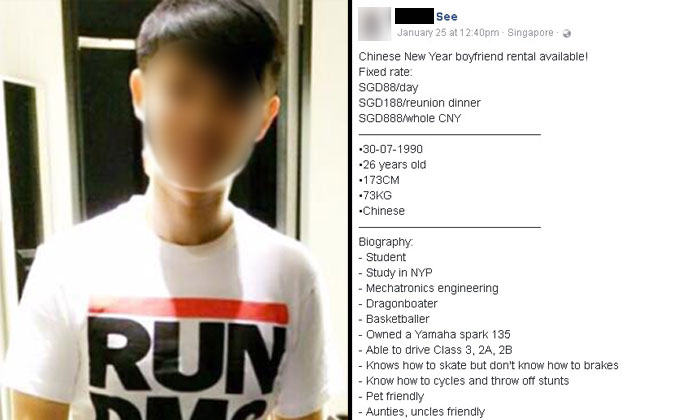 As Chinese New Year looms closer, the number of advertisements offering 'boyfriends for hire' also seem to be on the rise.

It was earlier reported that a 26-year-old Singaporean guy, Ong, was offering himself for 'rental' over the festive season followed by a 21-year-old hunk, Tan offering similar services for $88 per day and $1,888 for the entire Chinese New Year.

Offering a very competitive price of just $888 for the entire festive season, the former Nanyang Polytechnic student also owns his own motorbike and is able to drive Class 3, 2A, 2B vehicles.

He is also multi-lingual listing himself proficient in Mandarin, Cantonese,  English, Malay, Hokkien and Teochew, some better than others.

Apart from offering a menu of 'personas' from "millionaire Tony Stark" to "any Disney Prince", this guy can "ninja" you away from your annoying relatives and will even go so far to fake an engagement.

So how about it, ladies? This one's a steal.

Related Stories
Thug life: Guy who sells ex-GF's reclining chair now sells himself too
Taiwanese woman in hot water after video of her soliciting sex and charging up to $4.3k for 'services' goes viral
Why we eat pineapple tarts during CNY and the meanings behind other goodies
funny
Chinese New Year
CNY
boyfriend-for-hire
romantic
seller