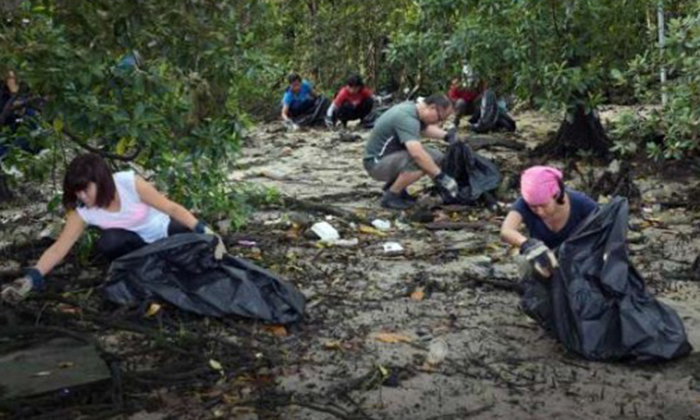 Many might consider 888 to be an auspicious number, particularly during this Chinese New Year period.

However, on Saturday morning (Feb 4), the number represented something less savoury.

A group of 67 volunteers collected 888kg of rubbish from the Lim Chu Kang mangrove as part of clean-up efforts organised by International Coastal Clean-up Singapore on the eighth day of the Chinese New Year.

The rubbish collected ranged from small items such as drink straws and plastic cups, to larger items such as tyres, water drums and a motorcycle helmet.

One of the organisers, Mr N. Sivasothi, said that while beaches such as East Coast Park get cleaned regularly, non-recreational areas such as the Lim Chu Kang mangrove get less attention.

He said regular clean-ups have had a positive impact. Earlier efforts by the group turned up more than a tonne of rubbish from the mangrove.

Mr Sivasothi, a senior lecturer at the National University of Singapore's department of biological sciences, said mangroves in the South East Asian region hold a wealth of biodiversity.

He said: "Just looking around, I can see at least 12 species of trees (at the Lim Chu Kang mangrove)."

He said the importance of protecting Singapore's mangroves has been highlighted to the authorities, and is hopeful more will be done to protect them, citing previous efforts.

"Mangrove trees were planted at Pasir Ris. The mangrove at Sungei Buloh was turned into a nature reserve, and now that's been extended to Kranji. So I think it can be done," he said.

Saturday's clean-up drew a diverse crowd, ranging from NUS students to visitors from as far away as India and Serbia.

The youngest volunteer was three-year-old Elizabeth Lim, who was there with her parents.

"We feel it's important to let her get her hands dirty and expose her to the importance of protecting the environment early on," said her father, Mr Adrian Lim.

The 40-year-old programme manager added: "People should know that there's all this nature right in our backyard, but there's also all this trash."