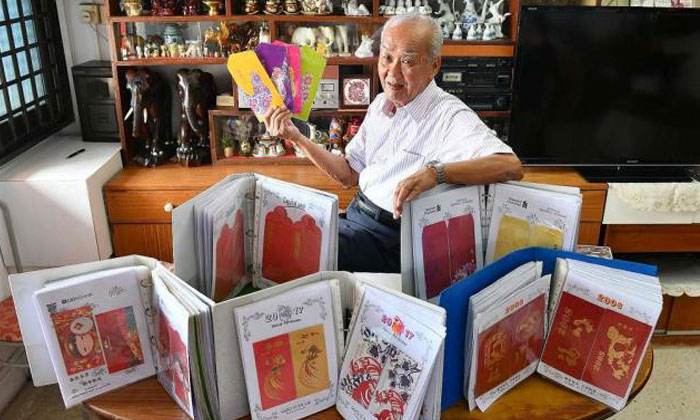 Like many who recently received a hongbao, you probably ripped it apart, kept the cash and discarded the red packet.

Not Mr Samson Low Seng San, 86. He keeps the empty hongbao envelopes, now in the thousands.

They are everywhere in his four-room flat in Toa Payoh - in his wardrobe, under the bed, in the bedside drawer, on shelves reaching to the ceiling - while thousands more fill the storeroom in his home.

The hongbao collector has amassed, by his estimate, some 100,000 hongbao over 15 years, and the number is creeping up by the week.

His wife, Madam Pua Gek Cheng, 73, who sleeps in a separate room, said in resignation: "The house is becoming a rubbish dump."Although they are kept neatly in files and boxes, the rooms are overflowing with them.

But Mr Low said collecting hongbao has kept his brain and body humming.

The retired businessman, who is a little hard of hearing, is sprightly and enthusiastic. "If you don't use your mind, you'll get dementia very quickly," he said.

"It is a difficult task... Others just collect hongbao as long as they're of different designs, but I organise them into topics. Whatever type of hongbao you want to see, I can easily find it for you," he said with pride.

Mr Low took out a few hefty pocket files from the shelf last week and opened them to show The Straits Times page after page of hongbao enclosed in plastic sleeves and stuck neatly on A4 pages.

The edges of the pages are embellished with decorative patterns photocopied from artwork Mr Low found elsewhere. Some of them are even coloured by hand.

Like a library, the files hold hongbao sorted according to the company that issued them, the year of issue, or Chinese zodiac animals.

There are hongbao from companies such as Daikin, Tiger Beer, DBS Bank and McDonald's.

There is an album full of hongbao from Buddhist temples and Christian churches, their designs containing religious teachings and imagery.

There is even one file containing green and purple hongbao, colours the Malay and Indian communities respectively consider sacred and peaceful.

Mr Low also dug out a box containing hongbao from the 1950s to 1970s. Many of them are in a darker shade of red and, being meant for coins, about a quarter the size of today's hongbao.

Madam Pua, who used to run a shop selling stamps to collectors, said: "The red ink comes off easily on your fingers, and people sometimes used it as lipstick."

Added Madam Pua, who could not avoid becoming a hongbao buff herself: "It wasn't fashionable to keep hongbao back then, and most people discarded them after taking out the money."

When asked whether he had any favourites, Mr Low said: "I can't say, there are so many designs. I focus on completing the series, not on whether the hongbao is nice or not. It depends on individual taste."

Indeed, he said he takes a liking to the more colourful designs while Madam Pua finds those too gaudy and said she prefers the red ones with gold artwork.

Mr Low conceded that he can never complete his collection. There are just too many out there, and the older hongbao are elusive and expensive.

He said that having spent a few thousand dollars over the years, his collection is worth about as much. "I collect hongbao because I like them, not for investment," he added.

He avoids hongbao sets that can command prices of up to a few hundred dollars, such as complete sets from banks that have exclusive designs for their priority banking and private banking customers.

Mr Low said he frequents the Chinatown area on most Sundays, where he buys from fellow collectors who set up temporary stalls.

On the weekend before Chinese New Year, he spent about $50 on some of the latest designs, such as a McDonald's hongbao showing a large packet of French fries on the front.

When not out hongbao hunting, he spends the day sorting out his new acquisitions, meticulously putting them in plastic sleeves and mounting them in the album.

And things look set to get even busier, as Mr Low is talking with a bunch of friends about setting up a society of hongbao collectors, which could materialise later this year.

"I decided to focus on that because it gave me an extra challenge," said Mr Chia, 57, a project manager in the construction industry.

Names like Ferrari, Lamborghini, Rolex and Estee Lauder grace his hongbao, along with rarely seen editions released by design agencies or by banks for their private banking customers.

Mr Chia estimates that about 300 designs appear every year from these luxury brands.

In fact, it was a special design that inspired him to start collecting hongbao about eight years ago.

"I heard on FM95.8 that VivoCity would be giving away a special-edition hongbao if you spend more than $100. I liked the design very much and started collecting," said Mr Chia.

He has accumulated more than 1,000 brand-name designs among the 6,000 hongbao in his entire collection.

He sources the premium hongbao mainly through exchange with fellow collectors and from friends who are customers of those companies.

He estimates that about 10 collectors in Singapore specialise in branded hongbao.