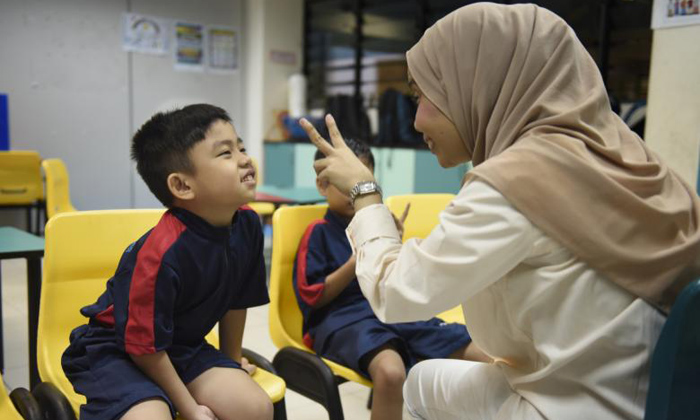 But in the past week, the boy has been putting Majulah Singapura on repeat.

The national anthem - sung every day by children in schools here - was new and exciting to Aqil Nabil Maulid, who started school only on Jan 16 despite being eight years old.

Nabil, who has autism, had been on a waitlist for Eden School, a special education (Sped) school run by the Autism Association, for a year.

There are three Sped schools here which are specifically for children with autism and all have a waitlist.

When his parents, who also have two daughters, aged six and 11, were told on Jan 3 he would have to wait another year, his mother cried and his father, Mr Maulid Mohammad, 34, took to Facebook to ask for help.

"Not asking for the moon. Just a place for my son in (an) autism Sped school!", wrote the sales merchandiser.

Mr Maulid's post caught the attention of Mr Keh Eng Song, the chief executive of the Movement for the Intellectually Disabled of Singapore (Minds), which operates four schools, none specifically for children with autism.

Mr Keh said: "I didn't think it was good for Nabil to stay at home for so long so I reached out to offer an interim arrangement; if he would consider coming to Minds Woodlands Gardens School instead."

That was how Nabil started school just over a week ago.

And to his parents' relief, he enjoyed it and even took the school bus by himself the next day.

His mother, Mrs Namirah Md Najib, 33, a housewife, said: "Just last Saturday he woke up at 7am and got panicky when he saw it was bright outside. He took his uniform and showed it to me. He's so excited about school."

Diagnosed with autism when he was 2½, Nabil had attended the Early Intervention Programme for Infants & Children and preschool, but for a while it looked as though any more education would have to wait.

Their story illustrates the quandary faced by many parents of children with autism, who might not realise, or consider, that there are other schools which might fill the gap.

The increasing demand mirrors the rising incidence of this development condition here.

But there are 13 other Sped schools which cater to children with autism, and those who have intellectual or physical disabilities of varying degrees.

Some of them, like the four operated by Minds, have up to 300 vacancies.

"Parents have a perception that they are served better in autism specific schools. But other schools are building up their autism capabilities," said Mrs Jenny Lai, principal of Eden School.

"Nabil deserves to have an education, just like other kids. We want to tell other parents on waiting lists that there are other options," he said.

Related Stories
Student with dyslexia discovers 'natural talent' thanks to school's approach
Students inspired to go the extra mile, thanks to teacher's creativity
The teacher who touched many lives: He kicked me in the butt for asking silly questions'
school
student