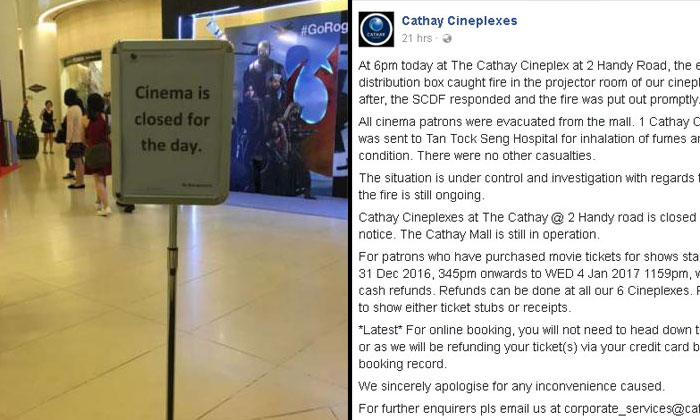 About 550 cinemagoers were evacuated after a fire broke out at The Cathay on Saturday (Dec 31) evening, and one person was taken to hospital for smoke inhalation.

The fire involved an electrical distribution box on the seventh floor.

It was extinguished by sprinklers before the Singapore Civil Defence Force (SCDF) arrived.

The Straits Times understands that the cinema level is closed off but other shops are still open.

SCDF told The Straits Times on Saturday that it was alerted to a fire at 2 Handy road at about 6.30pm.

Approximately 550 cinema patrons were evacuated by building staff as a precautionary measure, said the SCDF spokesman.

A staff member in his 30s suffered from smoke inhalation and was taken to Tan Tock Seng Hospital by ambulance.

The cause of fire is being investigated.

In a Facebook post at 8.13pm on Saturday Cathay Cineplexes said cineplexes at The Cathay were "closed until further notice".

It is issuing cash refunds for shows starting from 3.45pm on Saturday to Wednesday (Jan 4).

To get a refund, visit any Cathay Cineplex and present your ticket stub, receipt or e-mail booking confirmation.