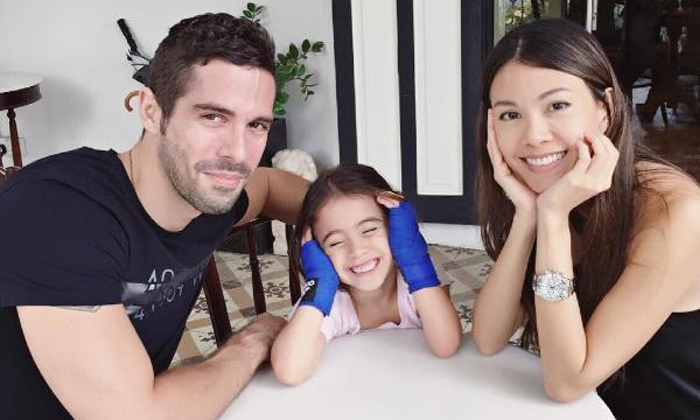 Wedding bells are about to ring again for local radio DJ Jamie Yeo, who accepted her boyfriend's proposal yesterday after an eight-month romance.

The Gold 90.5FM DJ announced the proposal yesterday afternoon in an Instagram post that carried only one word: "Yes."

This is the third time that Yeo, 39, is tying the knot.

Yeo's second marriage was in 2010 to British expatriate Thorsten Nolte, with whom she had a daughter, Alysia. The couple divorced five years later, citing "deep-seated problems that stemmed from (their) inherent personality differences."

Yeo revealed in a February interview that she met her now-fiance Rupert eight months after connecting through dating app Tinder in 2015.

Little is known about Rupert, other than him being a 38-year-old British expatriate who works at a consultancy firm.

In another interview with 8 Days magazine last month, Yeo admitted that she was "looking forward to a future with Rupert."

She said Rupert has been helping her raise daughter Alysia, whom Yeo has sole custody of. Previously, she was looking after Alysia by herself.

Describing him as dedicated, sweet, quiet and sensitive, Yeo added that she hopes Alysia will eventually come to see Rupert as a father figure, even though he is not her biological father. She noted that Alysia and Rupert are very close to each other, and that Alysia calls Rupert when Yeo is at work.

Related Stories
Russian beauty marries Chinese coal miner -- even though he has no house, car or savings
Man spends 3 years proposing to GF via love letters -- but she never notices until one day
Jamie Yeo
Jamie Yeo gets married
entertainment
celeb