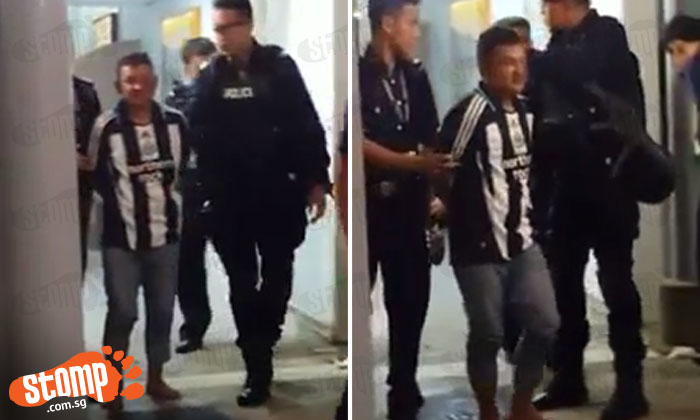 A 28-year-old man was arrested at Block 129 Yishun Street 11 on May 21 at around 9.30pm for drug-related offencees and possessing an offensive weapon.

Stomper Auzisha sent Stomp a video showing the man being taken away by police officers.

In the video, several policemen can be seen attending to the incident at the foot of the block. Their presence attracted a crowd of onlookers.

At around the two minute mark of the video, the suspect can be seen being escorted away from the HDB block by two policemen.

He was handcuffed and had no shoes on. Another policeman was holding on to a pair of shoes that is believed to be the man's.

The video ends after the suspect and the policemen left the scene.

Responding to a Stomp query, a police spokesperson said:

"A 30-year-old man was conscious when taken to Khoo Teck Puat Hospital.

"Another 28-year-old man was arrested for possession of an offensive weapon and drug related offences.