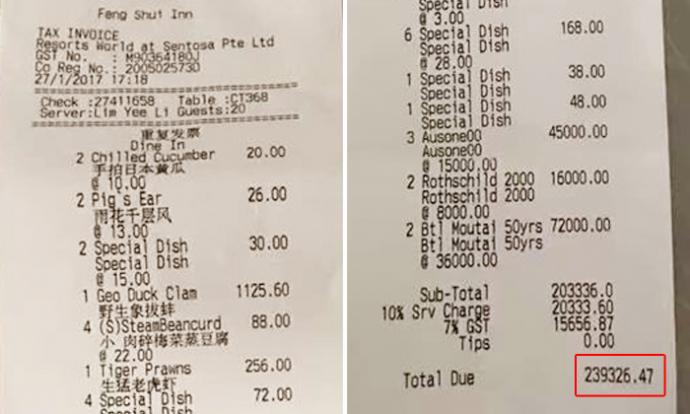 How much are you willing to pay for a meal? Some might fork out $12,000 a head, if a receipt going viral on the Web is to be believed.

The veracity of the receipt, which is supposedly from a restaurant on Sentosa, has been called into question. But food critics and industry veterans said that racking up such costs, while rare, does happen here.

Last week, reports emerged showing a receipt for a $239,326.47 meal on Jan 27, the eve of Chinese New Year, when Chinese families typically have reunion dinners. The supposed bill was for 20 diners at Feng Shui Inn, a Cantonese restaurant at Resorts World Sentosa (RWS).

Food veterans and critics told The Sunday Times it is unusual to spend that much, with chef Huang Ching Biao of Marina Bay Sands restaurant Jin Shan Lou saying that such meals are typically ordered by casino high rollers from China.

"It may be part of their loyalty perks, which they cannot convert to cash," said Mr Huang, who has 50 years of industry experience.

He added that high rollers tend to spend about two-thirds of the bill on alcohol. In the receipt in question, about that proportion of the bill was for alcohol, including two bottles of Moutai for $72,000. The priciest meal Mr Huang has seen stood at between $100,000 and $200,000 for 10 diners, which works out to a similar cost per person as the supposed Feng Shui Inn receipt.

Another industry veteran, who declined to be named, said that in his more than 30 years in the industry, he has also seen diners spend $10,000 a head at a Chinese restaurant where he worked.

Mr David Yip, a Business Times contributing writer and food blogger of five years, said that in the past, wealthy Chinese nationals might splurge on dining like this several times a month. Now, this is "very rare" because Beijing's anti-corruption drive has deterred excess spending.

But some industry players think the receipt could be a prank.

Referring to the 42 portions of fish, the anonymous industry veteran said: "No restaurant will ever sell empurau piece by piece."