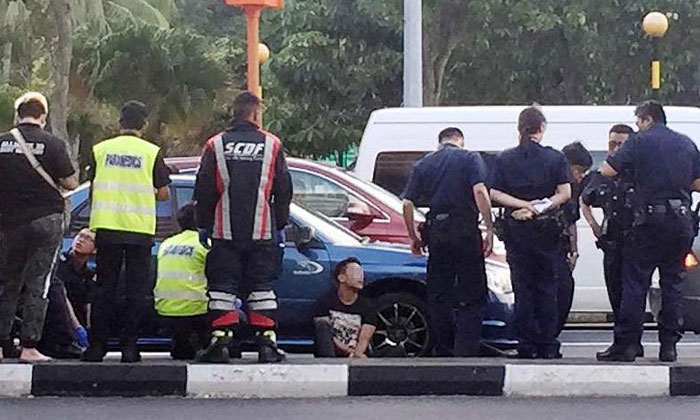 A 23-year-old man driving a rental car was arrested in Hougang on Monday for possessing a weapon.

The man, who allegedly wielded an electroshock weapon, was not the one who rented the car, according to a Shin Min Daily News report yesterday.

An employee of the car rental company, who gave his name only as Mr Zheng, 22, told Shin Min that staff had followed the man who rented the car because a check on him showed he had "a bad record".

"We followed him just in case. The car stopped at a carpark and another man drove it away. This violates the agreement, so we intercepted the car in Hougang Avenue 6," he said.

Mr Zheng, who was with three other men, said the driver was holding a white plastic bag full of cigarettes and was surrounded when he tried to escape.

He alleged that the man wielded a 40cm-long stun baton but did not manage to attack any of them. Mr Zheng then called the police.

The police told The Straits Times yesterday they were alerted to the incident at 5.47pm on Monday. Police investigations are ongoing.

This is the latest in a spate of incidents involving drivers of rental cars. Last week, a 27-year-old man driving a rental car was arrested for suspected drug trafficking after a car chase in which a Central Narcotics Bureau officer was injured.

In January, a 20-year-old man driving a rental car was arrested for drug-related offences, along with his 21-year-old female passenger, after leading police on a car chase around Telok Blangah.

Related Stories
Driver hits car while parking -- then moves her car to another lot and walks away smiling
Arrested: Driver who fled after ramming into motorcyclist on PIE
Hougang
arrest
crime
court
weapon
dangerous