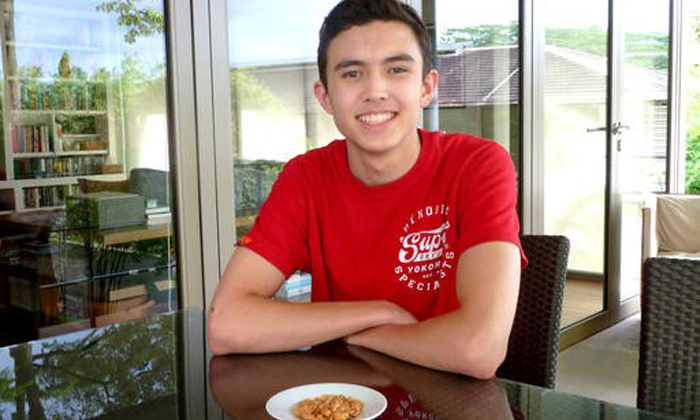 Whenever Mrs Yvonne Davies went out with her son, she would carry EpiPens - a medical device to inject epinephrine to treat acute allergic reactions - in her bag.

Her son, Euan, 16, is allergic to peanuts and all tree nuts. He is also mildly allergic to cats and horses.

His allergy is now under control, thanks to the Food Oral Immunotherapy (FOI) programme at the National University Hospital.

Mrs Davies, 53, and her husband discovered Euan's allergy when he ate his first peanut butter sandwich.

After just a mouthful, Euan, then 16 months old, started rubbing his face. He looked slightly flushed and was agitated. His lips also swelled to double their size.

In 2001, Euan was diagnosed after a skin prick test.

The Davies' home became a "nut-free zone" - every food item's label was scrutinised.

When eating outside, Mrs Davies was careful to avoid accidentally exposing Euan to peanuts.

For instance, the family stuck mostly to high-end Western or Japanese restaurants as peanuts rarely feature on their menus, and they are more accommodating with dietary needs, Mrs Davies said.

"My worst fear has always been for Euan to accidentally ingest a peanut. I just couldn't wrap my head around the concept of purposely feeding him peanuts every day," she said.

Euan, too, was daunted by having to eat something he had been conditioned to "avoid like the plague" for years.

But Mrs Davies was encouraged by the positive results of her friends' daughters in the FOI programme, and started Euan on it.

He graduated from the programme last year.

Now, he has to eat 28 peanuts once a month to maintain his threshold of tolerance for peanuts.

Eating a Snickers bar or peanut M&M's is now a stress-free affair.

"I certainly am not as cautious as I used to be. I don't really care to look at labels either, as I know that my tolerance for peanuts is much higher than anything that could be in processed foods," said Euan.

It is now possible for children with a peanut allergy to eat a Snickers bar, thanks to the Food Oral Immunotherapy (FOI) programme.

The first of its kind here, the programme helps patients develop a threshold of tolerance for a food allergen by exposing them to the allergen.

It was started by the National University Hospital's (NUH) Division of Paediatric Allergy, Immunology and Rheumatology in August 2015.

So far, 20 children have enrolled in the programme, with at least five having completed treatment for peanut allergy.

Of the rest, 14 are undergoing treatment for peanut allergy, and one for cow's milk allergy.

In the first half of this year, the programme will be expanded to tree nuts, like cashews and pistachios, and eggs.

Dr Soh Jian Yi, a consultant at the Division of Paediatric Allergy, Immunology and Rheumatology, told reporters that the treatment begins with introducing a tiny amount of food allergen to the patient, then increasing the dosage over time.

This is to teach the immune system to tolerate greater and greater amounts of allergen, said Dr Soh, who heads the FOI programme.

Children who go through this treatment will no longer have to be bound by food restrictions.

Dr Soh said: "There is also the psychological burden of constantly being on the alert, checking labels and foods taken outside of the home.

"In the case of a persistent food allergy, this means years of carrying this burden."

But rather than a cure, the programme is merely a way to develop a threshold of tolerance towards peanuts, he added.

This means that those with a peanut allergy will have to regularly consume peanuts to maintain the tolerance at a certain level. Though food oral immunotherapy does not involve any drugs, Dr Soh cautioned against trying it at home.

Those who wish to find out more can e-mail allergy_kids@nuhs.edu.sg.