ZoukOut back on Sentosa: 'It’s been three long years, so I’m just happy to be here' 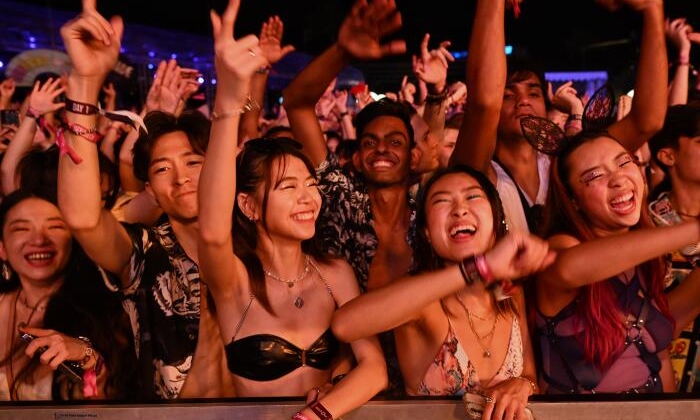 Dance music festival ZoukOut returned with a bang after a three-year hiatus at Siloso Beach on Sentosa.

The first night of the two-day dusk-to-dawn festival on Friday saw partygoers dancing along to a line-up of electronic dance music artistes, including popular names such as Dutch DJ Tiesto, as well as Singaporean acts such as Wukong.

The beach party is the 19th edition of the festival, which was first held in 2000. It was last organised as a one-day event in 2018.

The organisers, nightclub Zouk and event promoters AEG Presents, are expecting up to 30,000 revellers over the two nights.

The crowd, many in their 20s and 30s, was mostly in front of a massive, brightly lit stage that featured giant LED screens and smoke machines. Only patrons 18 years old and above are allowed at the event.

Among them on Friday night were Ms Saphira Sharma, a teacher at Pathlight School, and Ms Radhika Chandhok, a public relations executive, both 22. It was their first time attending ZoukOut.

“We weren’t old enough to go to the previous ZoukOuts, so we came here to check out the music and have fun at the beach,” said Ms Chandhok.

Ms Sharma said: “It’s nice to see everyone dressed up. There’s a lot of glitter.”

Then there were the ZoukOut veterans such as housewife Gracia Salter, 39, who welcomed the return of the festival.

“It’s been three long years, so I’m just happy to be here.”

There were also partygoers who flew into Singapore to attend the event, such as make-up artist Res Manalang from the Philippines.

“I’ve been to a lot of dance festivals back home, but the crowd here is different. They’re so alive, and it’s a very international mix of people.”

The festival grounds also had roving dancers, art installations and a food village with stalls by local food and beverage outlets such as Two Men Bagel House and Zouk Group’s Here Kitty Kitty.

Related Stories
ZoukOut is back after 3 years, but watch out for fake tickets on Telegram and Carousell
20-year-old seller who went MIA after getting payment for ZoukOut and concert tickets arrested
Stomper offering $500 reward for iPhone XS that he lost at ZoukOut in Sentosa
More About:
ZoukOut
sentosa
party