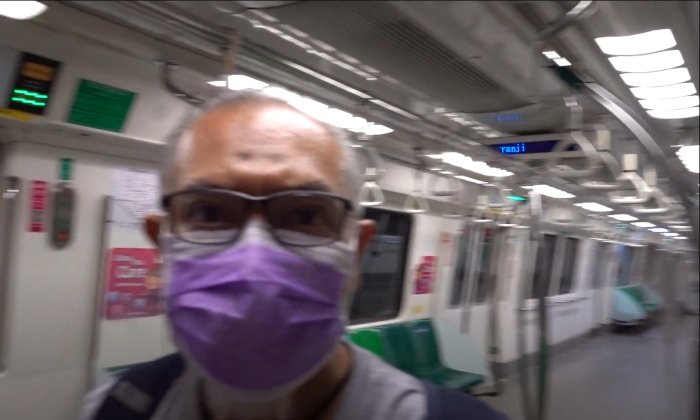 Matthias Ngan has uploaded more than 1,700 videos mostly of trains on his YouTube channel since 2010.

On Nov 18 at 12.06am, he was recording a video on the train at the Marina Bay station on the North-South Line. He stood by the train door with his camera facing out at the platform as the nearly empty train was leaving the station.

In the video, a man carrying a backpack can be seen in the reflection on the glass pane of the door walking up to Matthias and talking to him aggressively. Because of the train noise, it cannot be heard clearly what was said.

The man appeared to take a card out of his wallet to show Matthias and tell the YouTuber that he "cannot take" the video. The man's hand momentarily blocked Matthias' camera before he walked away.

Stomper Ethan saw the video and was outraged by how Matthias was treated.

The Stomper said: "The video shows the YouTuber being confronted by an SMRT Staff (off-duty, unknown if he is station staff) and is power tripped for no good reason. The staff has the audacity to use his hand and block the camera, making a whole mockery of his dignity.

"On behalf of the train spotter community, we severely condemn these acts by the staff despite the victim keeping to himself and doing his own thing IN AN EMPTY TRAIN.

"We implore SMRT to take impactful action to ensure that trainspotters' own emotional rights and physical safety are upheld and protected whilst they are conducting their activities within the existing rules and regulations of the Rapid Transit Systems Act."

Stomp is unable to confirm that the man in the video is an SMRT staff member.

When contacted by Stomp, Matthias said that the man showed his staff pass.

If the man is an SMRT staff member, he should be aware that video-taking is allowed.

"If you are using the photographs and/or videos for commercial or any other purposes such as academic projects, media productions or wedding photoshoots, please obtain our written consent before proceeding with your photography and/or filming," said the website.