She was already pretty, but YouTube star had plastic surgery over 30 times for BF -- and now regrets it 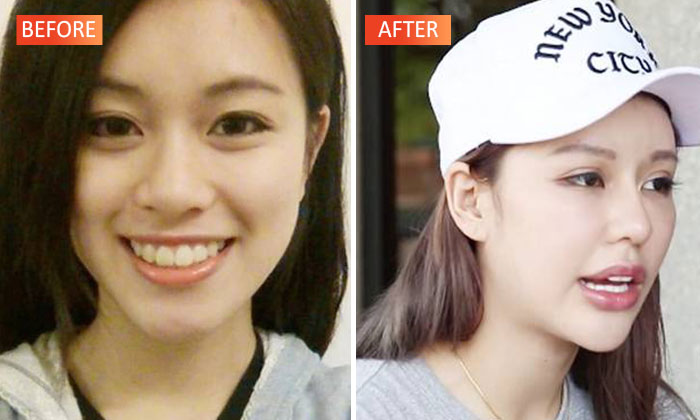 A 22-year-old YouTube personality from Hong Kong started going for plastic surgery procedures five years ago and has gone under the knife for over 30 times to date.

In a video, Berry Ng recounted how the younger her had envied supermodels.

Under ‘encouragement’ from her boyfriend, she went for her first procedure at a beauty salon offering student packages.

Berry forked out $137 for three injections but was convinced right after to spend another $2,929 on other procedures.

She became addicted to plastic surgery after that and kept spending money on procedures in her quest to become the ‘perfect beauty’, reports World of Buzz and China Press.

Most of her surgeries were done when she was about 21 years old, said Berry.

During that time, her ex-boyfriend, who was nine years older than her, kept criticising her looks and comparing her with other girls, she said.

The constant insecurity caused her to go on a plastic surgery spree.

Within six months, she did close to 30 procedures on her forehead, eyes, cheeks, nose and chin -- all in hopes of getting a compliment from her then boyfriend.

However, he offered none.

Berry said: "At that moment, if he had stopped me and told me that I was beautiful enough, I would have stopped, but he didn't."

Instead, her boyfriend told her breasts were too small, and Berry went for a breast augmentation surgery.

After the surgery, her boyfriend insisted that he did not ask her to do it.

She finally snapped out of it after when her mother who visited her during the recovery period after her surgery, cried upon seeing her.

Berry broke up with her boyfriend and recovered from her plastic surgery addiction.

She subsequently put up videos warning other girls about the dangers of going under the knife constantly.

Sharing her experience, Berry said that many girls are suffering the way she did, being in relationships where their partners would constantly find fault with their looks.

Asked whether she preferred her current looks or her old face, she laughed and said that she would very much rather go back to looking like her former self.

If there’s a lesson to take away from Berry’s experience, it’s to always love yourself for who you are, not how you look.