Youths pour curry down building: 'Bet you all $1 each that this is going to Stomp' 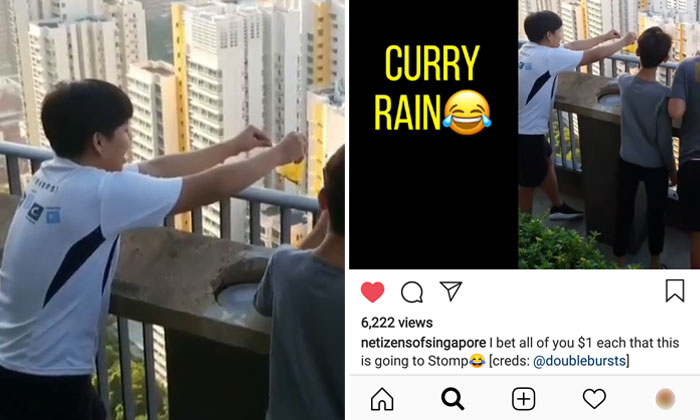 A youth was caught on video pouring a packet of curry from what appears to be the top of a building as his friends looked on.

Stompers Zyan and Danish alerted Stomp to the video that has been circulating online. It is unclear where or when this happened.

In the video, a teenaged boy is seen emptying the curry from a plastic packet over the edge of the building as his friends watch and laugh.

He is heard exclaiming, "Eh, why got grape inside one?"

Danish told Stomp he believes the teens were "inspired" by a similar incident when a guy was caught on video pouring Coke down a building.

"Kids nowadays will do anything to be on-trend," he said.

Zyan shared screenshots of the video that was reposted on Instagram page @netizensofsingapore. 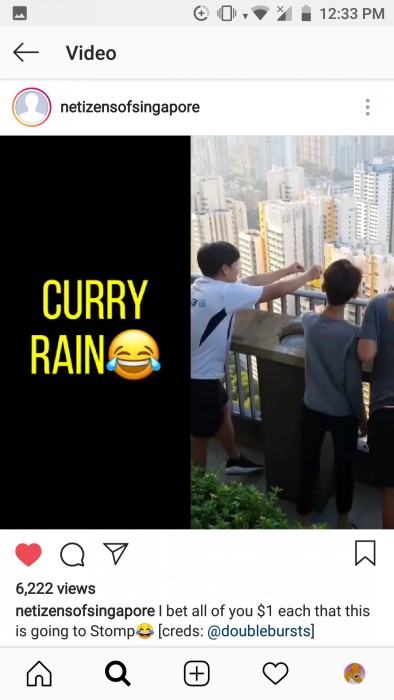 The caption says: "I bet all of you $1 each that this is going to Stomp."

However, the post appears to have been removed from the page.

Stomp understands that the boy pouring the curry was wearing a Broadrick Secondary School PE T-shirt.

Broadrick Secondary has reached out to Stomp to confirm that he is not a student of the school.

This is the latest case in a string of incidents involving youngsters filming themselves committing socially irresponsible acts.

Related Stories
Youth sits on ledge and pours Coke down building in expletive-laden Instagram video
Boy makes show of throwing plastic bottle off building while being filmed
Guys smoke e-cigarette and cigarettes on bus -- then film themselves and post video on social media
Youth takes father's car for joyride while friends film him: "This guy is a professional man"
Youth climbs over parapet and performs push-ups while dangling several storeys above ground
Youth speeds down road while pushing friend in supermarket trolley against traffic
"Beyond savage" youth rushes out to road in Bukit Batok, does 5 push-ups and runs back again
More About:
Youths behaving badly
litter
killer litter