Youths leap off Punggol bridge to go for a swim, post video online 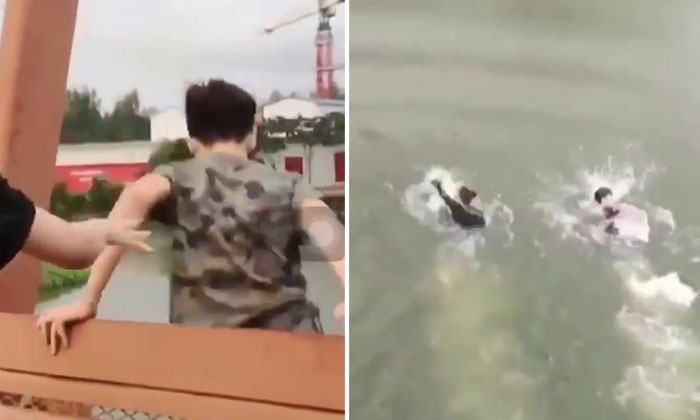 A group of youths were recorded on video jumping off a bridge and into Punggol Serangoon Reservoir.

A Stomper alerted Stomp to the video that was posted on Instagram Stories on Thursday (Dec 6).

She said that the series of videos were posted at about 7pm but have since been deleted from the Instagram user's profile.

The youths had apparently jumped from the Lorong Halus pedestrian bridge in Punggol.

Stomp did a Google search online to identify the brick-red bracings on the bridge.

In the video compilation shared by the Stomper, one guy is seen sitting on the side of the bridge with a girl's hand on his back.

He then jumps in together with another guy.

One more youth is seen leaping in around the same time, but from further along the bridge.

The three young men are then seen swimming towards land.

"I think that they did was very foolish," said the Stomper who added that this is the first time she's seen people jump into the reservoir.

"People go there to jog and they are there doing stupid things and then posting it on social media."

This is not the first time, youths have behaved badly and posted their antics on social media.

In July this year, another youth was seen throwing an oBike and ofo bike off the same bridge in Punggol in an Instagram Story video that was circulating online.

Related Stories
Guy throws oBike and ofo bicycle over bridge, police aware of matter
Youth smokes on bus, replies to comments on video: "I'm supposed to get a pack for the dare"
Youths open sealed products, dip fingers in to taste and put them back on supermarket shelf
More About:
Youths behaving badly
irresponsible
swimming
dangerous
bridge
punggol