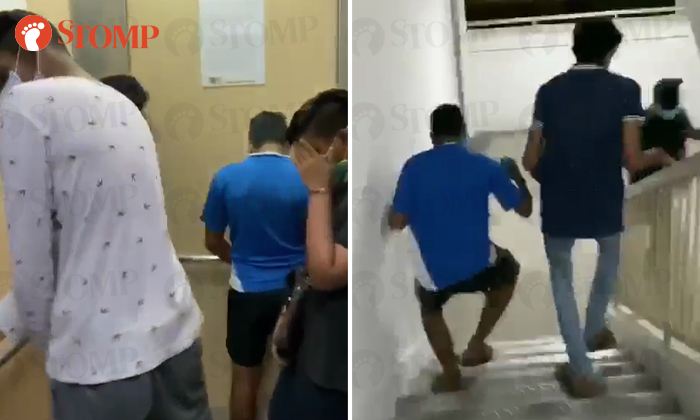 A group of four youths were caught on camera running away and trying to hide their faces after being called out for allegedly flouting elevated safe distancing measures.

Stomper Anonymous shared a video of the incident that occurred at Block 290 Tampines Street 22 on Sunday (Apr 19), at around 9.15pm.

According to Anonymous, her husband was just returning home from work when they happened to see the youths in a lift.

The Stomper said: "The four of them were gathering and drinking beer. They have friends staying about our unit and might have been house-visiting.

"When we confronted them, they said they were leaving."

In the video shared with Stomp, some of the youths can be seen covering their faces with their hands while being confronted. They also stood with their backs facing the couple.

As they exited the lift, one youth can be heard saying, "sorry, sorry" while another said, "We are leaving, we are leaving."

The group then fled down the stairs.

Anonymous added: "Not sure if they had been smoking but when my husband and I went upstairs to take a look, there was a heavy tobacco smell.

"We believe they had been drinking as we saw the youth in a blue shirt trying to hide his beer. He dropped the beer can and still can pick it up before continuing to run down the stairs as seen in the video.

"You can also see a beer can on the railing of the lift.

"When my husband came back from work, which was like around 10 minutes before the incident, there were no beer cans anywhere.

"The youths are always doing this in our block and sometimes even during late nights. It's causing problems to all the residents here."

On April 7, the government announced a ban on social gatherings of any size as part of circuit breaker measures to curb the spread of the Covid-19 pandemic.

The ban includes having private parties or gatherings with families or friends not living together, at home or in public spaces like parks and Housing Board void decks.