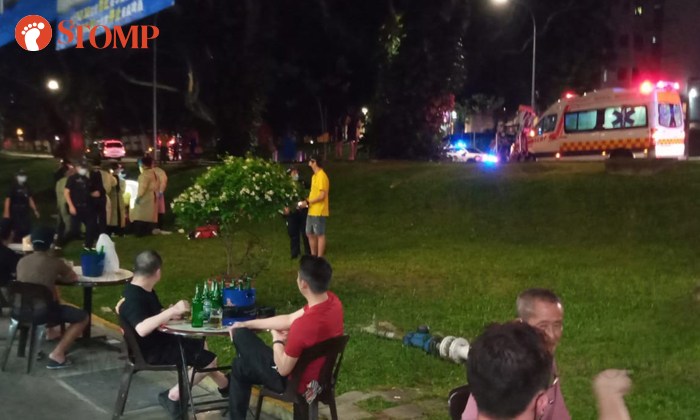 Two youths, aged 18 and 21, who allegedly slashed and stabbed a man at a coffee shop along Depot Road on Sunday (Nov 14) will charged in court on Wednesday.

They will be charged with voluntarily causing grievous hurt by dangerous weapon with common intention, in relation to their suspected involvement in the assault of a 37-year-old man.

The police said they were alerted to the assault at around 9.35pm.

The victim, who was bleeding profusely, suffered multiple lacerations and stab wounds on the head, neck, knee and chest. He was subsequently taken to hospital with multiple injuries.

His assailants fled and disposed of their weapons before police officers arrived at the scene.

Stompers Peter and Ethan shared videos of the scene in the aftermath of the attack.

The police said: "Investigations revealed that both men had been released from the Reformative Training Centre and had allegedly cut their electronic tagging to avoid tracking of their whereabouts. They are also suspected of being members of secret societies."

With the assistance of members of the public, and aided by images from police cameras, officers established the identities of the two alleged assailants and arrested the duo at a hotel in Sentosa on Monday (Nov 15), at about 4.45pm.

A 30cm knife used in the assault was recovered in the vegetation near the crime scene.

The men will be charged in court on Wednesday and the police will be seeking to remand them for further investigations.

Three other men, aged 19 to 28, were separately arrested for being suspected members of unlawful societies under the Societies Act.

Two of the men, aged 20 and 28, are believed to have met up with the two assailants after the incident. Police investigations into their alleged involvement in the incident are ongoing.

Those convicted of voluntarily causing grievous hurt with a dangerous weapon may be jailed for life, or up to 15 years with a fine and caning.

Anyone found guilty of being a member of an unlawful society under shall be liable on conviction to a jail term of up to three years and/or a fine of up to $5,000.

The police advised members of the public to steer clear of secret society activities and to report those engaging in such unlawful activities to the authorities.

They added: "The police will not hesitate to take firm action against persons involved in secret society activities.

"Where necessary, the police may invoke the Criminal Law (Temporary Provisions) Act, that provides for the detention of anyone involved in criminal activities, including those who are involved in secret society activities, that threaten public safety, peace and good order."

Related Stories
Man and woman arrested for slashing victim with knife at Yishun
FairPrice attack: Jail and caning for youth who chased victim, slashed him with knife that got lodged in his head
Man charged for slashing Certis officer with sickle at Canberra Link
More About:
attack
assault
weapon
slashing
stabbing
arrest
gang
youths
injured