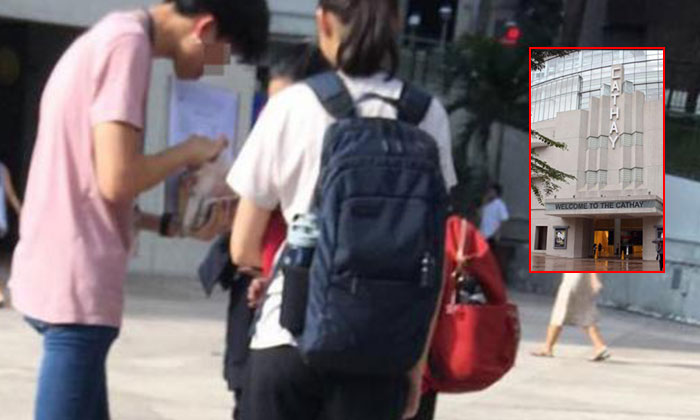 A few youths have reportedly been pestering students near the School of the Arts (SOTA) for donations, demanding at least $10 from each of their targets.

Even students with no money on them were not spared, as the youths would ‘escort’ them to ATMs to withdraw money.

In response to the incident, the school, as well as the parents of several students have lodged police report.

Students told Lianhe Wanbao that the culprits’ modus operandi was to draw close to their targets, before commenting that the 'well-off' students do not have to worry about having money for essentials.

The youths would then solicit donations from the students, saying that they should donate to people who needed the money more.

Some students fell prey out of the induced guilt, while others accuse the youths of partially coercing them to donate.

Lianhe Wanbao was alerted to the incident by the parents of many SOTA students and was told that the youths targeted students specifically.

A student was reportedly pressured to donate and lost $30 as a result.

A woman who declined to be named told reporters that her two children, both SOTA students, were ‘forced’ to donate by the youths.

The woman’s 13-year-old daughter was accosted by a youth outside The Cathay on March 2 while she was buying ice cream.

The youth, leveraging on the situation, told her that many people could not afford ice cream, and asked her to donate.

The girl told him that she had no money but donated $2 anyway.

Her friend, however, was not so lucky.

She was also approached and ended up donating $20 after she was accompanied to an ATM to withdraw money.

A youth approached him, saying that his shoes and laptop looked ‘expensive’ and that he must be from a wealthy family.

He then asked the boy to donate some money to people who were unable to afford these things.

The boy opened his wallet and told him that he did not have much, seeing that there was just a single $2 note.

The youth then took the note and left.

Another parent, Ms He Jingyi, 46, said that her 13-year-old daughter, also a SOTA student, was approached by a man who appeared to be in his 20s.

The man claimed that he was from a charity organisation and told Ms He’s daughter that although any amount would do, it was ‘best’ to donate at least $10.

After that, he gave the girl a handphone charm and thanked her for the donation.

According to the parents, there appear to be two to three youths involved, and they would usually operate near The Cathay and PoMo shopping centre.

Reporters visited the scene on Tuesday (March 27) and saw some youths approaching students for donations.

An employee at a cafe nearby said that the youths usually show up when the students are having lunch, and many of the students would end up donating, but there were also others who ignore them entirely.

In response to media queries, a spokesman for SOTA said that the school was alerted to the incident one week ago.

They proceeded to inform the students and their parents about it on Friday (March 23).

The school also advised the students on how they should act in the event the youths approach them.

She said: "We have already lodged a police report and increased the frequency of patrols around the school’s parameters.

"The security personnel will observe to see if there is anyone suspicious lurking in the vicinity."

The spokesman stressed that the school considers the safety of its students as its foremost priority, and will implement the necessary measures to protect them.