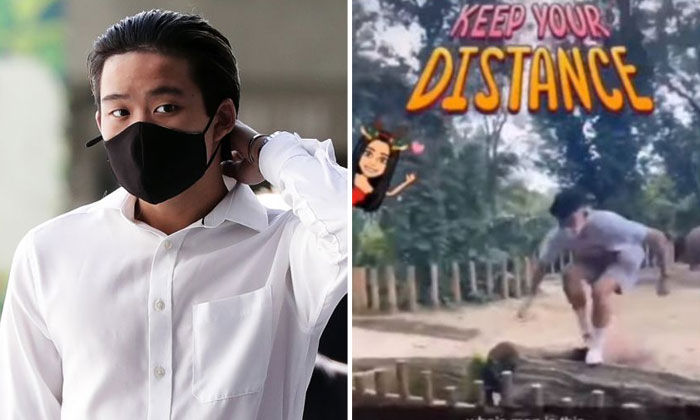 A youth who was caught on video last December doing a backflip inside a white rhinoceros enclosure at the Singapore Zoo was charged in a district court on Monday (July 12) with offences including vandalism.

Ralph Wee Yi Kai, 19, is also accused of two counts of mischief and one count of criminal trespass.

The Singaporean teenager is accused of trespassing into the rhinoceros enclosure at around 2.40pm on Dec 17 last year.

Separately, he allegedly committed an act of vandalism at around 2.40am on Oct 9 last year by hitting an information panel at a bus stop in Sixth Avenue off Bukit Timah Road, causing $900 in damage.

He is also said to have caused damage to two cars at the nearby Sixth Crescent that morning by hitting their side mirrors.

In a statement on Sunday evening, the police said that officers were alerted to the case at the Singapore Zoo at around 5.40pm on Dec 17 last year.

"Preliminary investigations revealed that the man's companion, an 18-year-old woman, allegedly filmed him before the man posted the video on his TikTok account, using the moniker @ralphwee_.

"Through investigations, officers from Woodlands Police Division established the identities of the man and woman on the same evening," the police added.

Following investigations and after consulting the Attorney-General's Chambers, the police issued a stern warning to the woman last Thursday for abetting criminal trespass.

Her identity was not disclosed in court documents.

The police warned that they would "take a strong stance against persons who blatantly disregard rules of public attractions and commit selfish acts that may endanger their lives".

Videos that circulated online showed the youth doing a backflip inside the enclosure before leaping over a barricade and back onto the visitors' walking path.

The original video was uploaded onto his TikTok account, which had about 33,000 followers at the time.

The Wildlife Reserves Singapore had earlier told The Straits Times that it filed a police report on Dec 17 last year.

It condemned the youth's actions in an Instagram story posted the following day, calling it a "reckless and mindless act which is socially irresponsible, extremely dangerous and simply disrespectful to wildlife and animals".

The zoo operator also urged people not to pull such stunts, as lives could be put in danger.

In November 2008, a Malaysian contract worker was mauled to death by white tigers after he climbed into their enclosure at the Singapore Zoo.

The 32-year-old man, who worked as a cleaner, jumped into the moat that separated the tigers from visitors and waded towards the animals.

He was killed in full view of shocked onlookers. A state coroner ruled the case as suicide in 2009.

If convicted of criminal trespass, he can be jailed for up to three months and fined up to $1,500.

For vandalism, an offender can be either  fined up to $2,000 or jailed for up to three years and receive between three and eight strokes of the cane.

For each count of mischief, an offender can be jailed for up to a year and fined.