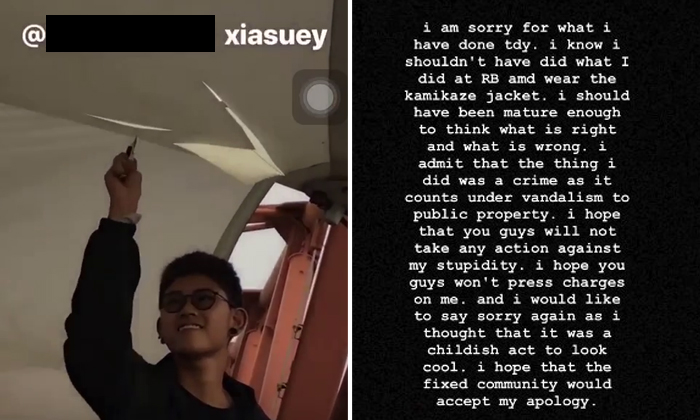 A youth was seen grinning while using a penknife to slice through the shelter of the Lorong Halus bridge in Punggol as his friends watched and someone filmed him.

While this is just another of many incidents involving youths committing dumb acts on camera, he is one of few who subsequently made a public apology.

Several Stompers alerted Stomp to a video of the incident, which was posted on Instagram Stories on Thursday (Dec 27).

In the video, the boy can be seen perched on the iconic red bridge while holding a penknife.

He then reached up and made several cuts in the shelter of the bridge before getting down.

The youth's Instagram handle was also tagged in the video itself: "[username redacted] xiasuey ('disgraceful')".

A check on the youth's Instagram Stories shows an apology that he posted 14 hours ago. 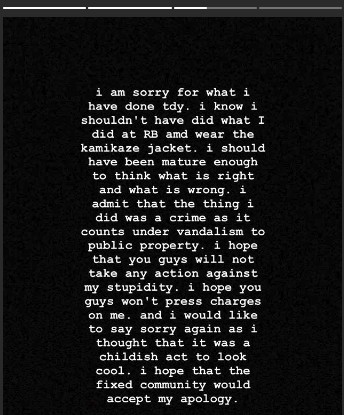 Acknowledging his actions as vandalism of public property, the youth apologised and said: "I am sorry for what I have done tdy (sic)."

"I should have been mature enough to think what is right and what is wrong," he added.

The boy also said he hoped that action would not be taken against his "stupidity" and appealed for people to accept his apology.

National water agency PUB, which manages the Lorong Halus Wetland where the bridge is, said it has made a police report.

According to The Straits Times, the police are investigating the incident.

Related Stories
Youths leap off Punggol bridge to go for a swim, post video online
Guy throws oBike and ofo bicycle over bridge, police aware of matter
Is there a point to this? Youth sets cardboard on fire at void deck while being filmed
More About:
Youths behaving badly
vandalism
instagram