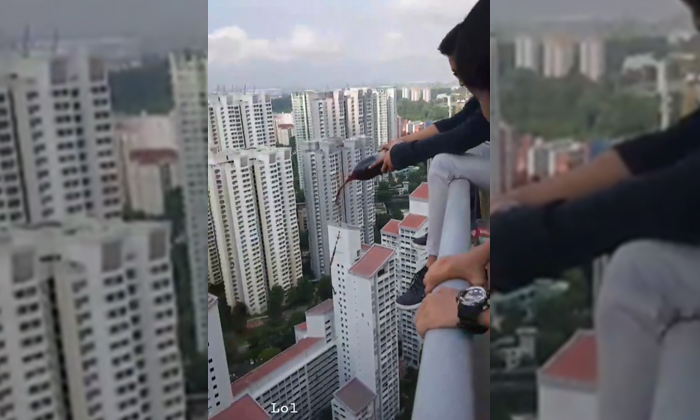 A youth was seen sitting on the ledge of a building and pouring a bottle of Coca-Cola down below while his friends watched.

Stomper Alex alerted Stomp to videos of the incident, which he said had been posted online as Instagram Stories.

It is unclear when exactly the incident took place, but it is believed to have occurred at Skyville@Dawson.

In the videos, a youth can be seen sitting on a ledge with his legs dangling over a railing. He then pours Coca-Cola out of a bottle down the building while being filmed.

His friends can be heard laughing and spewing expletives.

Alex told Stomp: "These young people think that they are very cool by pouring coke down the building.

"I have nothing against them but their acts are getting more and more atrocious, displaying a lack of guidance from their parents and guardians."

This is the latest case in a string of incidents involving youngsters filming themselves committing socially irresponsible acts.

Related Stories
Boy makes show of throwing plastic bottle off building while being filmed
Guys smoke e-cigarette and cigarettes on bus -- then film themselves and post video on social media
Youth takes father's car for joyride while friends film him: "This guy is a professional man"
Youth climbs over parapet and performs push-ups while dangling several storeys above ground
Youth speeds down road while pushing friend in supermarket trolley against traffic
"Beyond savage" youth rushes out to road in Bukit Batok, does 5 push-ups and runs back again
More About:
Youths behaving badly
litter
killer litter