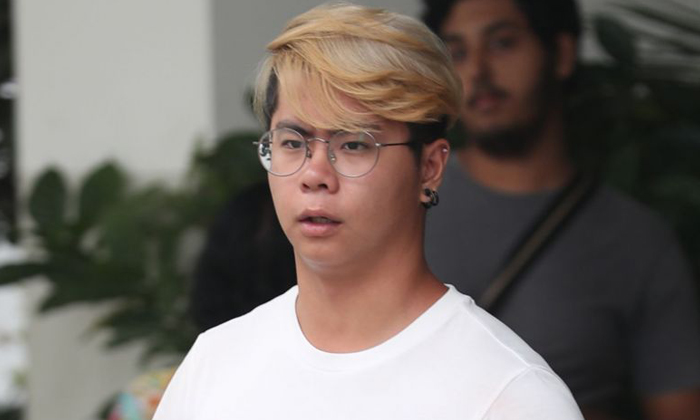 A 19-year-old rode in the middle of a road while ferrying a friend on his e-scooter, but failed to keep a proper look out and collided into a car that was attempting an illegal U-turn.

Both riders fell, with the pillion rider injuring his right knee, chest and left forearm.

E-scooter rider Benjamin Neo Song Ya pleaded guilty in a district court on Wednesday (Nov 13) to one charge of causing hurt by a rash act.

The car driver was given a stern warning for the illegal U-turn.

The court heard that Neo was riding his e-scooter along Bedok North Street 2 at about 11.45pm on June 12 last year when he met with the accident.

Neo was heading towards the entrance of a carpark, with Mr Gareth Soh, 17, riding pillion.

At this point, Mr Ng Bao Hui, 34, was driving in front of Neo and Mr Soh. The rear camera footage of Mr Ng's car showed that Neo had seen Mr Ng slowing down to make a turn at the entrance of the carpark, said Deputy Public Prosecutor (DPP) Tay Jingxi.

Neo's e-scooter had no visible headlight, she added.

"The accused assumed that Ng was turning into the carpark entrance. The accused claims that he tried to slow down, but had problems with the e-scooter brake," said DPP Tay.

But Mr Ng chose to make an illegal U-turn into the opposite direction of the road instead, she added.

Neo failed to keep a proper lookout ahead and continued to proceed straight, colliding into the car's door as Mr Ng was executing the U-turn.

"The impact of the collision resulted in both the accused and the victim Gareth falling off the e-scooter," said DPP Tay.

Both Neo and Mr Soh sought medical treatment for their injuries, she added. Mr Soh was given three days of medical leave for sustaining soft tissue injuries.

Court documents do not state what Neo's injuries were.

Neo claimed that he sold the e-scooter after the accident.

District Judge May Mesenas called for a probation pre-sentence report for Neo to assess his suitability for probation.

Neo's sentencing will be heard in December.

Related Stories
Guys ride e-scooters with GFs sitting in front -- and one doesn't even stop for pedestrians during red light
PMD users seen riding on grass patch after ban -- but it's illegal too
Probation for teens who beat red light on e-scooters and caused accident with another PMD user
More About:
e-scooter
pmd
PMDs
court
accident