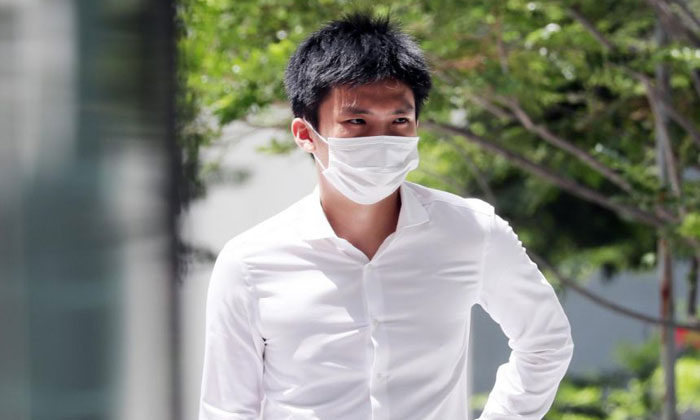 A 20-year-old man visited his friend who was serving her stay-home notice (SHN) in a hotel room, intending to surprise her on her birthday.

But Sow Kaiser's actions landed him in court, where he pleaded guilty on Thursday (July 29) to one count of abetting the friend to breach SHN requirements.

Another charge of criminal trespass will be taken into consideration by District Judge Tan Jen Tse during sentencing at a later date.

Court documents state that Sow and his friend, Ms Teo Yue Qi, have known each other from their school days.

Ms Teo had entered Singapore on Nov 22 last year and was placed on SHN the same day. The last day to serve her notice was Dec 6.

Court documents did not state where the 20-year-old had arrived from.

She was supposed to remain alone in her room at The Ritz-Carlton, Millenia Singapore and not come into close contact with other individuals.

The court heard that Sow had been communicating with Ms Teo and knew her room number.

He entered the hotel on Ms Teo's birthday on Nov 28 to surprise her with a visit.

But Sow found that he could not take the lift at the main lobby to Ms Teo's room on the 17th floor.

He then followed some hotel guests to the 30th floor before using a service elevator there to reach the 17th floor.

Ms Teo was surprised to see Sow when he appeared at her door. But she did not stop him from entering her room, where he spent about an hour.

After taking the stairs to the first floor, he encountered a staff member, who tried to detain him. But Sow managed to escape before taking a taxi home.

But he told Sow that he is not required to impose such punishment even if the youth is found suitable for it.

Sow's case will be heard again on Sept 8.

The Immigration and Checkpoints Authority told The Straits Times that Ms Teo was given a composition fine for breaching SHN requirements.

Related Stories
12 investigated for flouting Covid-19 rules by gathering to drink in hotel room, 1 man arrested for punching police officer
SAF commander who allegedly scolded passer-by for asking him to wear mask to be disciplined: MINDEF
Bail revoked for woman who failed to wear mask at MBS and other places, now faces 22 charges in all
More About:
Covid-19
court