Youth arrested after kicking and stomping on car in Bedok, shouting at police 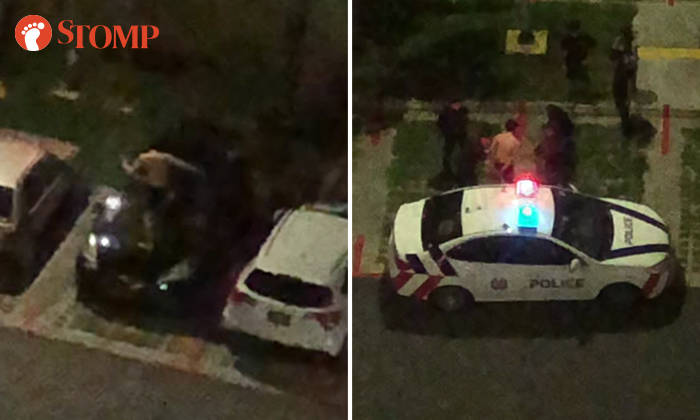 A 20-year-old man was arrested for disorderly behaviour after causing a ruckus in the wee hours of Wednesday (Dec 9).

Stomper V was up late playing Mobile Legends when her game was disrupted by a commotion from downstairs at Block 403 Bedok North Avenue 3, at around 2.30am.

V, who shared videos of the incident, recounted: "I was ending my Mobile Legends match and I heard a guy screaming loudly.

"I decided to ignore it but then I heard banging sounds. So I went out of the house and saw a group of young punks at the carpark.

"A guy was pushing a girl towards a silver van violently. His friends came and tried to calm him down but it backfired.

"He then ran towards one of the guys and went under the void deck of Block 403.

"I'm not sure what happened there but he ran back out and started to vent his anger on a poor innocent black car that was parked at the carpark.

"Two stomps were all it took for him to smash the car's windscreen. I'm not sure if his leg power was 'tokong' or the windscreen was lousy."

In the videos taken by V, the youth can be seen repeatedly kicking a car, then leaping onto its bonnet and stomping on it.

A police car subsequently arrives at the scene, which the youth approaches. He is heard shouting at one of the police officers before being handcuffed.

V added: "I'm not one of those kaypohs that want to stir crap but would just like to share these videos as I thought it might help the police or the car owner to claim insurance.

"I also hope the guy’s leg is okay, and that he received support and help."

In response to a Stomp query, the police said they were alerted to a case of disorderly behaviour at 2.33am and arrested a 20-year-old man in relation to the case.