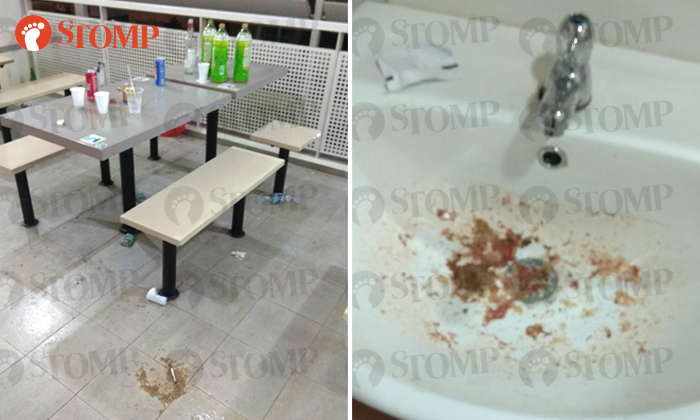 Stomper Alex visited Commonwealth Crescent Market and Food Centre on early Sunday morning (April 28) and was turned off by the sight that greeted him.

The Stomper said he saw a group of three youths getting ready to exit the premises at around 6am -- and leaving behind their litter.

Photos taken by Alex show cans, bottles, cigarette butts and cigarette packets strewn across the floor and tables at the hawker centre.

There was also vomit on the floor and in a toilet sink.

Alex told Stomp: "There were two girls and one guy. They looked very young, like they were teenagers or in their early 20s.

"They were starting to leave just as I reached and were holding cigarettes.

"They made a mess at the non-smoking area of the hawker centre and even the nearby public toilet.

"There were cigarette butts, spit and vomit all over the floor. Even hard liquor bottles were left behind.

According to Alex, he informed the hawker centre's management of the matter and cleaners came to clean the area at around 7am.

Related Stories
New signs banning smoking and drinking put up after Stomp report on litter at Telok Blangah Rise block
Poor cleaner has to clean up mess and litter at Sembawang Park
Why can't residents at this Pasir Ris block use the rubbish chute instead?
More About:
dirty
messy
disgusting
litter
Youths behaving badly
hawker centre