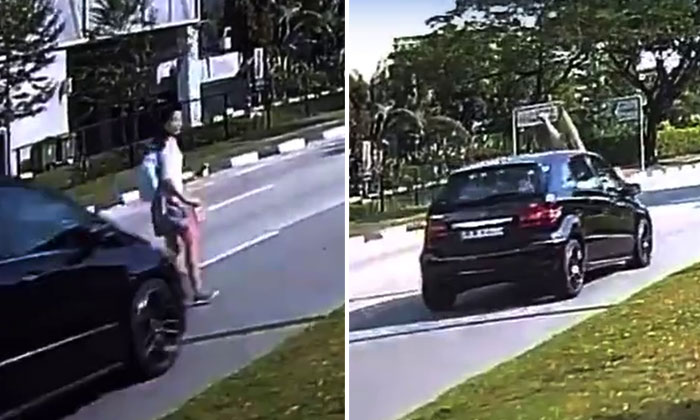 A 13-year-old girl was taken to hospital after she was sent flying after getting hit by a car while she was jaywalking across Tampines Avenue 10 on Thursday (Sep 27).

According to the post, the incident happened near the United World College (UWC) of South East Asia's Tampines campus at about 4.38pm.

In the video, the girl, who appears to be wearing a school uniform and a backpack, is seen crossing the road without looking to her right for oncoming traffic as she approaches the road divider.

She does not appear to see the car before it hits her, causing her legs to go up over the vehicle and one of her shoes to be flung off.

She then rolls onto the road when the car comes to the stop.

The video ends as the driver of the car exits the vehicle.

"The jaywalker reminded me of how vulnerable and always 'blur' my little sister was," said Jayden.

"After watching the video, I called my sister to check up on her and am glad she's fine.

"I hope this accident is a wake-up call to everyone to be careful out on the roads and to cherish everyone you love every day."

In response to a Stomp query, the police told Stomp they were alerted to the accident at about 4.39pm.

A Singapore Civil Defence Force (SCDF) spokesman said that they were alerted at about 4.40pm.

The pedestrian, a 13-year-old girl was conscious when conveyed to KK Women's and Children's Hospital by an SCDF ambulance.

Related Stories
Jaywalker runs across road to catch bus at night -- and nearly gets hit by car
What was the adult thinking? Man and 2 kids dash across PIE slip road
Man with baby crosses road carelessly like he owns it, rages at driver who shook head at him
More About:
Accidents
jaywalking
pedestrian