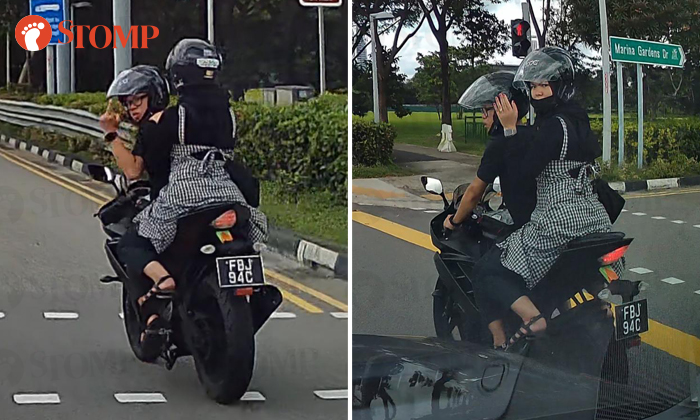 A motorcyclist was caught on camera hurling vulgarities and flashing his middle finger during a road dispute on Sunday afternoon (Dec 20).

Stomper Eski said the incident occurred at the junction of Central Boulevard and Marina Gardens Drive at around 12.20pm.

Eski recounted: "This P-Plate motorcyclist on a right turn-only lane insisted on going straight, not once but twice.

"I tried to reason with him but he just started getting abusive, hurled vulgarities and flipped the bird at me."

A video that Eski shared with Stomp shows the motorcyclist shouting, "F*** you lah!" during an argument between the two.

The motorcyclist's pillion rider can also be seen making a hand gesture.

Eski, who also uploaded the video on YouTube, added: "Arrogant and oblivious young punks like these should be off the roads for the safety of others."