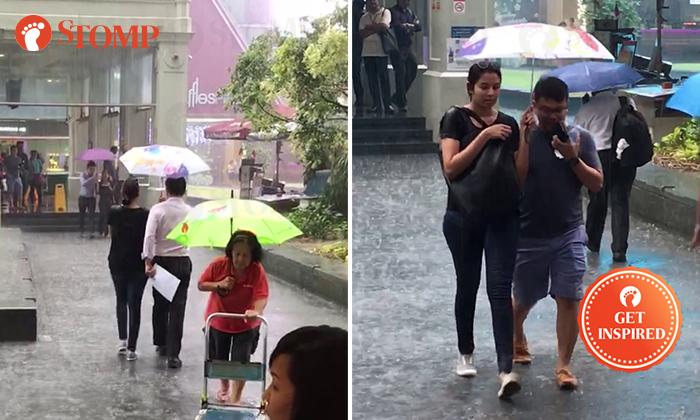 Submitted by Stomper Am

A young lady was seen sheltering strangers to and fro Raffles Place MRT Station during a heavy downpour at about 3pm on Monday (Dec 2).

Stomper AM was one of those sheltered by the young lady. After reaching a neighbouring building, AM decided to film what was happening.

She contributed a video to Stomp and said: "I was on the way to a medical appointment. When I stepped out of the MRT, I realised it was raining very heavily.

"I saw a young lady in a black top carrying an umbrella while sheltering strangers to and fro.

"She had helped about four people before approaching me.

"I told her that it's all right because she was totally drenched but she said she could help me get across.

"But she told me that even if I declined her offer, she would still help other people."

The Stomper added: "After she had sheltered me across to The Arcade, I stood there and watched her.

"I saw her helping at least another eight to ten people before I had to leave.

"When I spoke to her, she mentioned that she's a Singaporean and an undergraduate studying at Singapore Management University.

"I thought it was the holidays for her but she said that she still had an examination to sit for next week and was only in this area because she's working part-time at a cafe in Raffles Place.

"I wondered then how did she have time and she told me she was in between shifts, so I asked how could she go back to work now that she's so drenched.

"She said that it's all right and she could change into another top.

"It was such a tiny umbrella but she was more concerned with sheltering other people instead of herself.

"She's a nice, unassuming lady who was very selfless.

"Many people were watching her. I was standing next to two men who were very impressed.

"She's marvellous. She's so self-giving and thinking of others before herself. It was a very selfless act."