Young Karen and Old Karen argue over table, film each other at Whampoa Hawker Centre 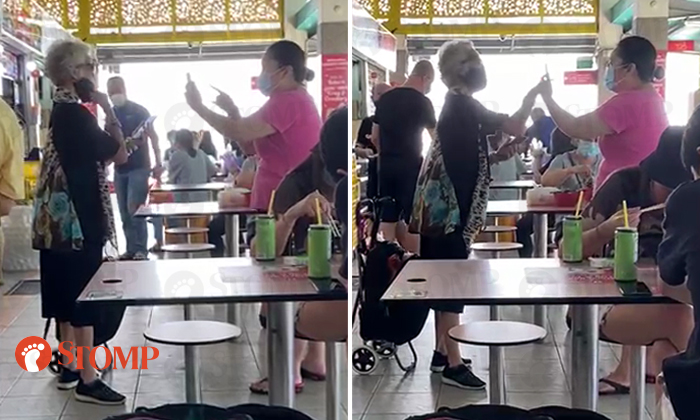 The younger woman in the video has come forward with her side of the story.

She also clarified that the incident happened on November 18, 2020, during Phase 2 of Singapore's Covid-19 measures and not last weekend as Stomper Joe had claimed.

(Screenshot showing the date, time and location of the incident)

The woman told Stomp: "During Phase 2, seats at the hawker centre are marked and we are required to maintain 1m safe distancing.

"I was seated at the table first with my family. We were having our breakfast.

"The older woman did not ask whether the seats were taken and just sat down abruptly.

"I told her that the seat was taken and she could not just sit down like this next to me without maintaining 1m safe distancing."

The woman said she then called for police assistance and two police officers arrived to take her statement.

She added: "They told the old lady that she needed to maintain 1m safe distancing and couldn't just sit beside me.

"I had told the police officers that I did not wish to pursue the case since she was an old lady, though I insisted that they advise her not to just sit down next to a stranger without 1m distancing in Phase 2, which they did."

Two women were caught on camera in a heated argument at Whampoa Hawker Centre — over a table.

Stomper Joe Yap said he witnessed the dispute that occurred at the Block 91 Whampoa Drive hawker centre on February 28, at around 10.35am.

He recounted: "The ah ma in a black shirt did not know that the seat had been reserved by the pink shirt lady and sat down.

"Suddenly and immediately, the pink shirt lady rushed over and shouted so loudly at the ah ma, who looked to be around 75 years old.

"The first thing she said to the ah ma was, 'I will take a video of you and post it on the Internet.' She also told her that she was useless and old."

In a video taken by Joe, the two women can be heard shouting at each other.

Younger woman: You take off your mask, I film (you) loud and clear. This table is here.

Elderly woman: I - (something unintelligible)

Elderly woman How did I knock you?

The argument then escalated into who was seated where, though most of the elderly woman's speech cannot be heard clearly.

Younger woman: Don't come and talk to me about this kind lah. Old people, say we bully you. Or is it you bully people? So what if I call the police?

Younger woman: Waste of public resources, is that your fault or mine?

A man then intervened and tried to diffuse the situation. Both women can also be seen with their phones raised at each other.

The younger woman is heard telling the man: "I was sitting here, you know!" and "She's just trying to find trouble with me."

Stomper Joe said: "The elderly woman walked off afterwards. The pink shirt lady was being a bully and humiliated her."