"You hurt me!": Maid cries after allegedly getting kicked out by employer, police investigating 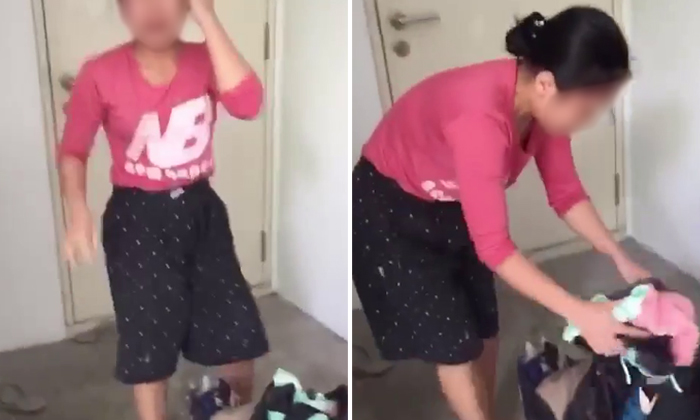 A domestic helper was seen crying and packing up her belongings after she was allegedly kicked out of home by her employer, and police are investigating the incident.

The police told Stomp that they were alerted to a case of voluntarily causing hurt against a domestic worker along Holland Road on Saturday (Feb 1), at around 1.30pm.

Videos of the incident, which occurred at a condominium, were posted on Facebook and have been viewed more than 630,000 times.

Another foreign domestic worker (FWD) who worked in the same condominium had witnessed the incident and uploaded the videos online.

In the first clip, a maid can be seen falling onto the ground after apparently being pushed. She is also heard crying and repeatedly saying, "You hurt me!"

The second video shows the witness going downstairs to check on the maid, whose belongings were on the floor outside the unit and along the corridor.

The Indonesian maid can be seen crying while stuffing some clothes into a black bag.

According to Lianhe Wanbao, the witness said: "During her time working here, (the maid) often complained to me about being hungry and having to go without food whenever she did something wrong or ate without her employer's permission.

"She had also asked me for help the night before the incident, but I did not expect this to happen."

In a statement on Monday (Feb 3), the Centre for Domestic Employees (CDE) said that it was aware of the videos "that seemed to suggest an FDW was in distress outside her employer's house."

"We are in contact with the FDW and the authorities currently to assist her, should she need further advice," said the CDE in a Facebook post.

"We urge the public not to speculate, and let investigations run its due course."

When contacted by Stomp, the Ministry of Manpower declined to comment as it is a police case and investigations are ongoing.