You are with a child, yet you jaywalk and nearly get hit by bike 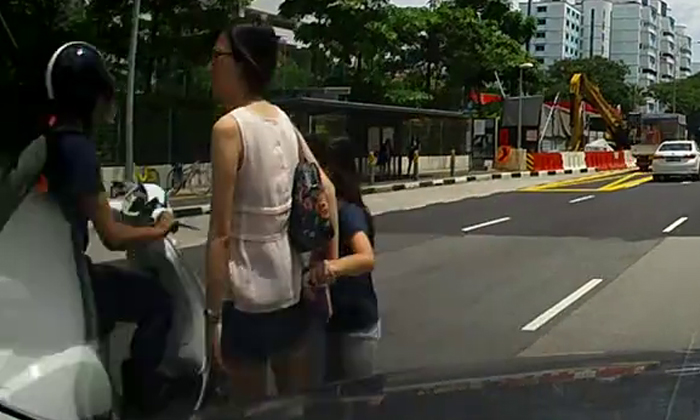 A woman was seen jaywalking while holding the hand of a young girl, presumably her daughter, despite oncoming traffic.

Facebook user Goo Yin who uploaded a video of the incident, which occurred along Tampines Avenue 1, said it took place on Nov 4 at around 12.35pm.

In the clip, the driver who recorded the video can be seen slowing down for the pair of pedestrians who were crossing the road halfway.

Nevertheless, the woman and child had to stop in the middle of two lanes to avoid an incoming road scooter.

Cautioning parents against similar acts, Goo Yin wrote in his Nov 8 post: "I had to slow down and almost come to a stop to avoid hitting this mother and her daughter.

"In fact, I am fortunate to have slowed down... look at how they had to take a step back when the motorbike came.

"If you missed the bus, there is always the next. If you are disabled by an accident, there may not be a next time you get to take the bus."

Related Stories
Monkey narrowly escapes fatal accident after dashing out in front of car along PIE
Close shave for woman who almost gets hit by van at HDB carpark
Jaywalker left with bleeding cheek and nose after getting hit by van at MacPherson Rd
More About:
near accident
jaywalker almost knocked down
jaywalk
pedestrian