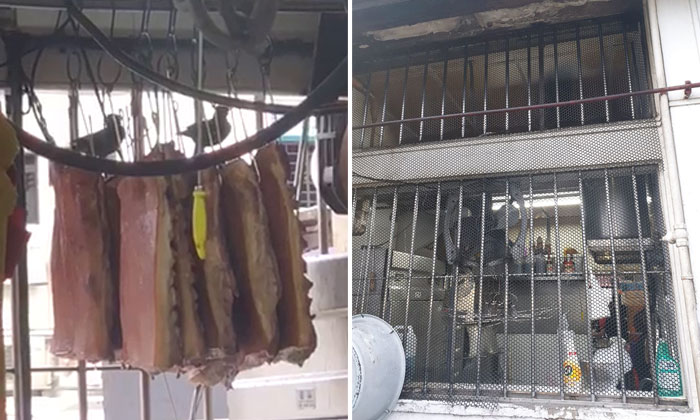 The Singapore Food Agency (SFA) said it will be taking enforcement action against a food stall in Yishun after a video circulating online showed mynah birds pecking at slabs of hanging meat.

It sparked alarm over food hygiene standards at the stall.

In response to a Stomp query, an SFA spokesman said they promptly inspected the stall upon receiving feedback about the video.

"We are taking enforcement action for the hygiene lapses detected.

"We have directed the operator to store all meat in the chiller or other covered receptacles to prevent contamination by pests and birds," the spokesman said.

"Food safety is a joint responsibility.

"While SFA puts in place and enforces the regulatory measures, food operators must play their part by adhering to good food hygiene and preparation practices."

It said it is aware of the video and explained that its staff had hung the raw pork out to dry before keeping it in their freezer as their "commercial fridge was full".

"As we have customers at [our] storefront, we were busy serving the customers thus there was a slight delay in keeping the pork into freezer which leads to birds pecking on them," it said.

It added that someone recorded the video and circulated it instead of informing them mynahs were coming into the stall.

"As seen on the video, there were a total of 8 pieces of pork affected and we threw all of them away as it cannot be used anymore," it said.

"SFA personnel [have come] down and we have [co-operated] with them regarding this situation as well as raising our stall's [cleanliness] level.

"We have also put up netting on the grills to prevent such similar case[s] from happening again.

"Rest assured that we will maintain good hygiene and cleanliness in order to serve our customers better."

Members of the public who come across any potentially errant food operator should report them to SFA via the online feedback form (www.sfa.gov.sg/feedback).

As part of the enquiry and gathering of evidence, SFA may engage the feedback provider for more details.

SFA will not hesitate to take enforcement action against errant food handlers if we have obtained sufficient evidence.