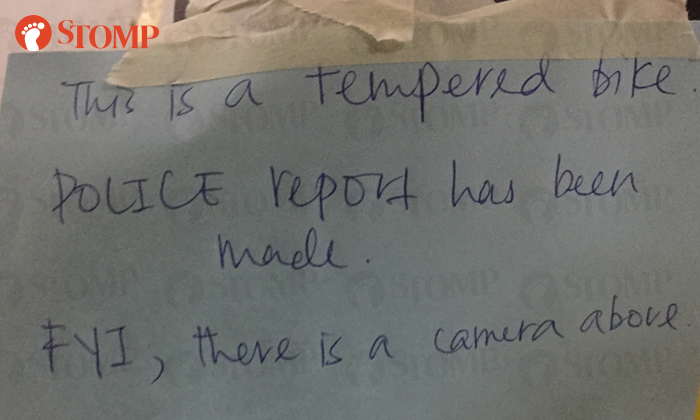 Saddened to see more instances of ofo bicycles being vandalised and tampered with, Stomper Terry decided to leave a note for the perpetrators and anyone who might be thinking of committing similar acts.

He came across two damaged ofo bicycles at Yishun Block 868 at around midnight today (June 28) and left the note behind, then saw another two spoilt bicycles nearby.

Part of the note reads, "FYI, there is a camera above," meaning that CCTV footage of anyone tampering with the bikes might have been captured.

"While I was going for a jog, I came across two ofo bikes which had been visibly tampered with. The lock and plate were gone.

"I wrote a note and did a report, as I thought it would give a stern warning.

"I came across another two bicycles that had been tampered with at the block beside.

"Although I don't uses the ofo service. It saddens me that such incidents are getting rampant."

The Yishun resident said that he has since lodged a report with ofo and added, "Hope to see ofo stepping up their preventive measures."