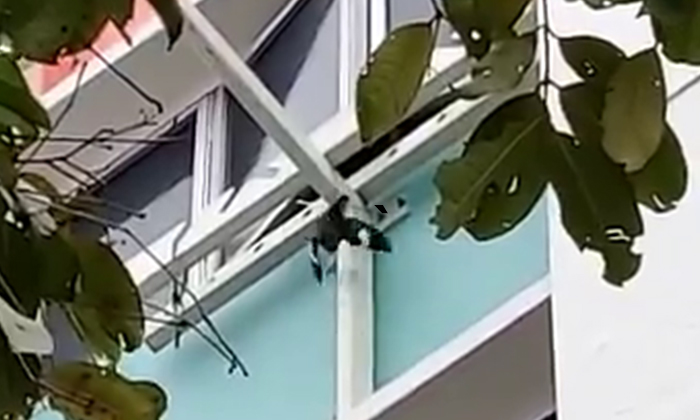 The National Parks Board (NParks) is investigating an incident where a Yishun resident had hung a mynah from her flat's laundry pole to teach it a lesson.

The Animal Concerns Research & Education Society (Acres) shared a video of the mynah dangling from the laundry pole in a Facebook post on Tuesday (Dec 10).

Acres said that they were alerted to mynah via their 24-hour rescue hotline.

Their rescue officers were shocked after finding out from the flat's resident that the mynah was hung from the laundry pole so that it, along with other mynahs, would be taught not to enter her kitchen.

Acres also assessed the mynah for injuries and given food and water before it was released.

"The resident was informed that this is an act of cruelty and the rescue officers advised other ways to deter birds who are drawn to exposed food. NParks is currently investigating the case," said Acres.

The Animal & Veterinary Service (AVS) told The Straits Times that they were concerned after finding out about the mynah.

AVS shared that alternative methods could be adopted to prevent mynahs from entering their houses.

Examples include keeping bins covered with heavy lids, removing leftover food from their sinks and installing screens/netting on windows.

Residents can also leave their windows closed for a period of two weeks to break the birds' habit of entering homes.

AVS group director Jessica Kwok said that safeguarding animal welfare is a shared social responsibility and encouraged members of the public to report suspected cases of animal cruelty with pictures and videos at www.avs.gov.sg/feedback or call 1800-476-1600.

First-time offenders, who are caught abusing an animal or bird may be charged under the Animals and Birds Act, could face a fine or up to $15,000 and/or a jail term of up to 18 months.