Yishun resident gets complaint over 'cooking smell': HDB finds no sign of food catering in flat 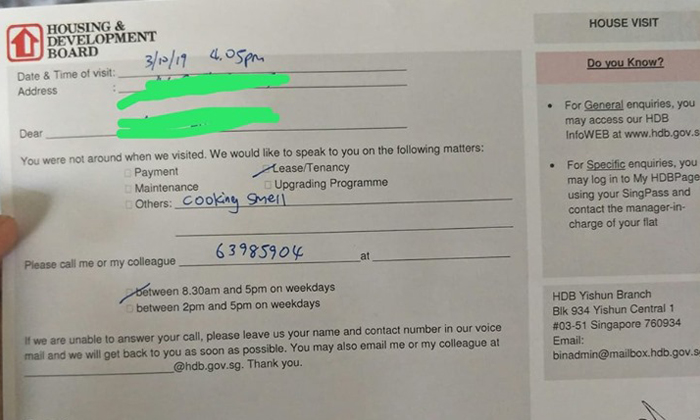 The Housing and Development Board (HDB) has clarified an online photo that showed a resident receiving a complaint over cooking smells coming from a rental flat in Yishun.

Facebook user Aspa M Hatta had posted a photo of a service card that HDB staff had left at the flat on Oct 3, requesting to speak to the flat's occupants about a "cooking smell".

When contacted by Stomp, Aspa said that the flat is located at Block 461B Yishun Avenue 6.

Aspa told Stomp: "I later spoke with an HDB officer and he said someone has been sending photos to HDB of us doing catering from the unit.

"Thing is, yes, we are caterers, but we don't do heavy-duty cooking at the unit and we rarely do catering orders from the unit. We'd cook at elsewhere proper. It really doesn't make sense."

Aspa later found out that a report filed against the unit was based on a neighbour providing photos of him and his cousin allegedly providing illegal catering services, reported The Straits Times.

In response to media queries, HDB said it received feedback on Sep 25 that the rental flat was being used for food catering operations.

A spokesman explained: "As food catering is prohibited in HDB flats, HDB visited the flat to understand the situation.

"As no one was at home, our staff left a service card requesting the tenant to contact HDB.

"We have since met with the tenant to clarify the purpose of our earlier visit. Our inspections found no indications of food catering activities in the flat.

"We understand from the tenant while she does run a small-scale food catering business, the cooking activities are carried out at another location, and not in the rental flat."