Yishun Primary School students who returned $1,500: Our parents are proud that we got Stomped 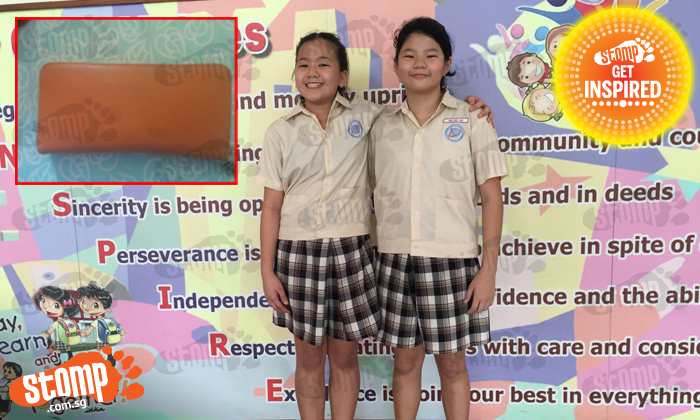 The two girls from Yishun Primary School who returned Stomper Priscilla's lost wallet last Thursday, told Stomp in an interview today (Mar 6) that their parents were proud of them for getting Stomped for a good deed.

The Primary Six students, Chelsea Oh and Ng Sin Hui, were on their way home last Thursday (Mar 2) when they spotted a wallet on the ground near Ahmad Ibrahim Primary School.

They decided to pick it up to check for identification details, and were shocked to find that it contained a lot of cards and $1,500.

Upon looking at the Identification Card (IC), they were also surprised to discover that it belonged to the mother of one of their schoolmates, later identified as Priscilla.

However, they decided to go the extra mile to return the wallet to the owner in person, because her house was in the vicinity.

The girls said that Priscilla was very grateful to have her wallet returned, and were even treated to a McDonald's meal as a gesture of gratitude. Priscilla then alerted Stomp to the kind act by the two girls.

The girls said that they only found out that they were featured on Stomp last Saturday (Mar 4), and felt humbled by the praise they received from netizens.

Chelsea said: "I felt very shocked and happy to find out I was on Stomp. When my parents noticed, they were very proud of me."

Sin Hui added that her mother and cousin were pleased by her good deed.

Vice-Principal of Yishun Primary School, Mr Nicholas Tan, attributed the civic-mindedness of the students to the school's emphasis on values education.

"We are especially glad that our students said that they remember the need to be honest. That is why when they saw the big sum of money in the wallet, they decided to return it instead of keeping it," he said.

Watch the interview in the video below!