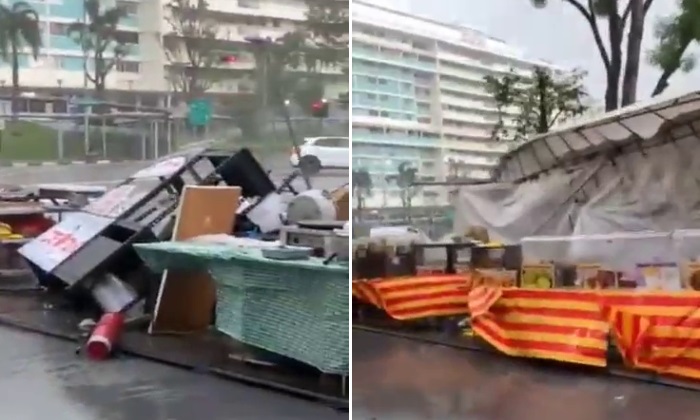 The last day of business spelled trouble for stall owners at a pasar malam at GV Yishun on Tuesday (June 28) when an awning collapsed due to heavy rain and wind around 2pm.

Mr Hazri, 36, said the incident damaged his grill, among other food items that probably have to be thrown out.

“It’ll cost me almost $1000 at least,” he lamented, as he stood gazing at the debris where his stall once stood.

Still, he was lucky not to have been injured during the incident – something which could not be said for another man who had been in the area.

The man was reportedly injured by falling equipment, but was conscious when taken to hospital.

SCDF said it received a call for assistance at around 2.20pm and took a person to Khoo Teck Puat Hospital.

The pasar malam had been running daily at the location since May 30, usually until 11pm. Yesterday, however, the tentage was dismantled by 6pm, when TNP visited the site, as stall owners were seen cleaning debris and packing up their equipment.

Stall worker Roseanne Syafiqah, 32, recalled when the structure toppled over.

“It was like a low-blowing wind or something. The entire thing lifted up and collapsed,” she said.

A video posted on Facebook shows the tentage knocked over backward onto the pedestrian walkway.

While stalls on the right side escaped relatively unscathed, five other stalls were left exposed to the elements.

The combination of rain and falling metal also added unwelcome ingredients to stalls with food displayed in the open.

One stall worker, who declined to be named, estimated that she lost a few hundred dollars in a matter of seconds.

“The containers of drinks and food like tea eggs got tipped over,” she said, adding that two ovens had been destroyed, as the fall had "shattered the glass parts".

The organiser of the Pasar Malam, who wished to be known only as Mr Ho, said the company plans to reimburse the stall owners for their losses, pending a review.

Related Stories
Man gets hit in the face by banner flapping in the wind at Chinatown
Punggol resident almost impaled by tree that fell on car during thunderstorm
Taiwanese Stomper's tribute to our pasar malams is full of nostalgia: 'Hope Covid-19 ends soon'
More About:
night market
Yishun
weather
storm
heavy rain
tent