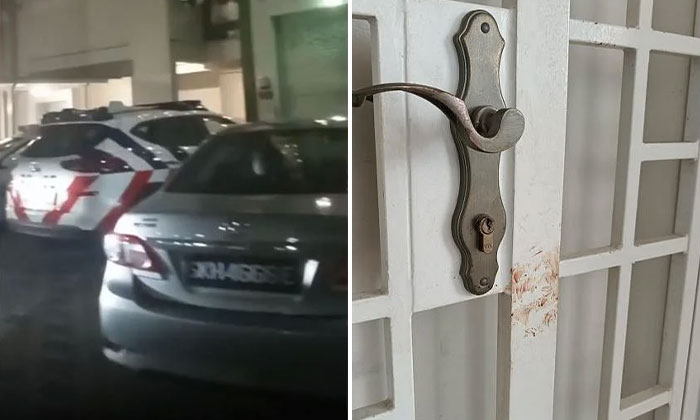 A man who allegedly attacked a couple with a knife at a housing block in Yishun on Thursday was charged in court on Saturday morning (June 25).

He appeared in court via video link while handcuffed in remand.

He was wearing a white polo T-shirt and a blue mask.

According to court documents, Karim is accused of attacking Sri Bandiyah and Dhanvan Jeet Singh Minder Singh with a 26cm knife at 510A Yishun Street 51 on Thursday evening.

He allegedly did so while under a remission order between April 2020 and October this year and could face a more severe sentence.

District Judge Sarah Tan granted the prosecution's application to remand Karim in the Institute of Mental Health for psychiatric observation.

Karim will return to court on July 8.

The Straits Times reported on Friday that the attack was said to have happened after a recurring feud between Karim and a couple - a man, 62, and a woman, 41.

Neighbours said that the three had been arguing heatedly over the past week, including once on Wednesday when the man allegedly threatened the couple with a knife. He returned on Thursday and allegedly attacked them.

The police said that the attack purportedly arose from a prior dispute between both men who knew each other, and that the victims were taken to hospital.

At the incident location on Friday, a trail of what appeared to be blood could be seen from the lift lobby to the door of one of the rental flats.

In a widely circulated video online, several police vehicles can be seen parked along the road near a block of flats. The video's caption states there has been a slashing incident at the block.

For voluntarily causing grievous hurt by dangerous means in a way that is likely to cause death, Karim could face up to 15 years in jail, caning and a fine.