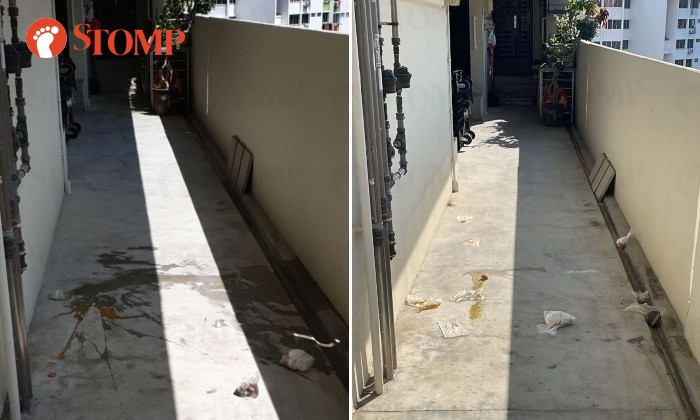 The 11th-storey corridor of Block 363 Yishun Ring Road has been littered with "packages" of human waste every day since June 29.

Nee Soon Town Council said it cleans the corridor daily and has stepped up checks at the affected area at least three times a day.

Stomper Crystal shared photos of what she described as "packages" of human poop and pee in the corridor.

She said: "Before the cleaner comes, the terrible poop and urine smell would already come into my bedroom, living room, kitchen and dining room."

Crystal would keep her door and all the windows closed all day, making her home "sauna hot", yet she said: “The terrible smell still can come in through the gaps.”

The Stomper said she could not stand it when sleeping and eating.

She said: ”Every day I have to brush the corridor with washing powder. But the horrible smell already seeped into the cement and spread into the rooms whole day and night.”

In response to a Stomp query, Nee Soon Town Council said: "The town council performs daily routine cleaning of common areas such as corridors and void decks. In response to this case, our conservancy workers have stepped up checks at the affected area of Block 363 Yishun Ring Road at least three times a day.

"We have also issued educational advisories to the residents of the mentioned block, appealing for them to be socially responsible.

"We are working closely with the Residents' Committee (RC) to identify, engage, and advise the resident responsible for this. The town council will also work closely with the National Environment Agency (NEA) as we continue to monitor the situation.

"Nee Soon Town Council takes public hygiene and safety seriously. We would also like to encourage all residents to practice good neighbourly habits to foster a pleasant and safe environment for all to live, work and play in."

Earlier this month, Stomp reported a similar case where bags of human waste were thrown every day from a block at Fernvale Street.