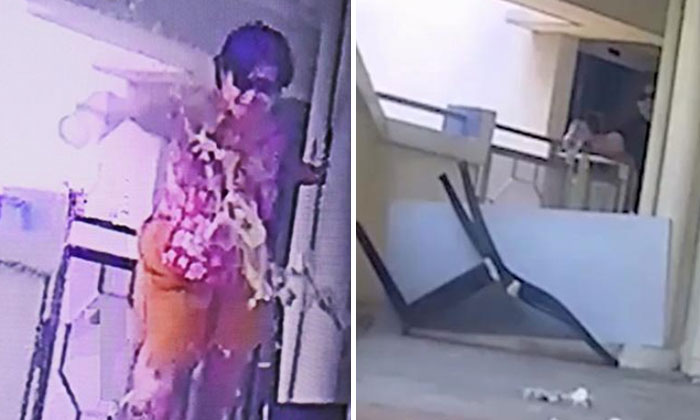 An elderly woman who harassed her neighbours 36 times within the span of a year, prompting them to erect a ‘wall’ to keep her out, was charged in court in April 2018.

Residents of Block 112 Yishun Ring Road said that the woman often poured liquids and substances at their doorsteps.

The items poured ranged from salt, oil, and dark sauce, to even urine and sanitary pads.

Furthermore, the woman, who often donned a pair of sunglasses, is also accused of stealing her neighbours’ slippers, reports Shin Min Daily News.

Two households thus decided to erect a makeshift barrier to keep out the intruder.

The court heard that between Feb 5, 2017 and March 4, 2018, Chen had harassed her neighbours a total of 36 times. This included dumping an unknown white and blue substance, as well as a yellow liquid, at their doors.

Furthermore, Chen also placed toilet paper on a bicycle belonging to a neighbour on the 6th floor, and poured water on the metal gates of a 4th-floor neighbour, resulting in a loss of $500.

Of the 36 charges, 33 counts of harassment were carried out on a 6th-floor neighbour, Mr Li Wei Kuan.

Chen was arrested on May 27 last year, and charged in court in April this year.

The trial will resume on July 12.