Yet another man 'rubbing' himself on bus while staring at woman 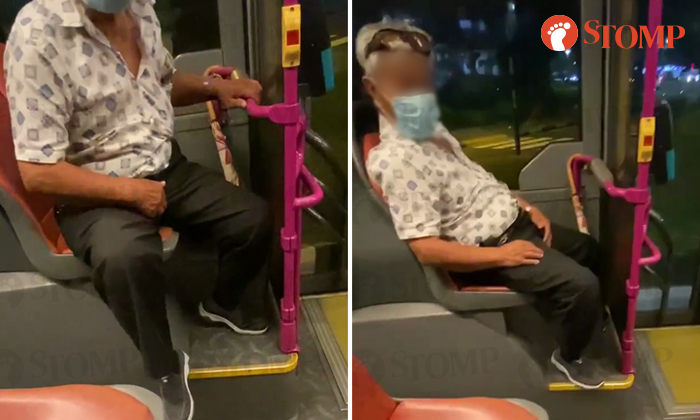 A woman was left disturbed and disgusted after witnessing a man perform a lewd act in front of her during a bus ride.

The incident occurred on bus service 24 on Tuesday evening (March 30), during a Stomper's entire bus journey from 7.40pm to 7.48pm.

The Stomper said the man was already on the bus when she boarded at Le Crescendo Condominium and still onboard when she alighted along Boundary Road.

The woman, who wished to remain anonymous, recounted: "This uncle kept turning towards me during the whole journey. The first few times he looked at me, I ignored him.

"After awhile, he started rubbing himself.

"I felt disgusted by his actions and took videos as evidence."

In a 10-second video shared with Stomp, the man can be seen rubbing his groin area and then turning towards the woman. He then switches hands and continues rubbing himself, before switching hands again.

Another 12-second video shows the man rubbing himself non-stop while staring at the camera.

Stomp will not be uploading the videos due to their obscene nature.

The Stomper added: "Being a woman in my early 20s, I did not know how to approach the situation other than changing my seat during the later part of the journey.

"When I was tapping out to alight, I actually heard him mumble something. It seemed like he was directing it at me because he was alone and there was not much of a crowd.

"However, I ignored him and just pretended I did not hear anything."

The Stomper also said it was her first time encountering something like this.

Although not prompted, the Stomper shared that she had been in office attire of a knee-length dress with 3/4 sleeves.

She added: "The man was behaving very disturbingly. I was really uncomfortable and did not know what to do, so I did not inform the bus captain or the police.

"I hope to share this on Stomp so that parents are more aware of these situations and can teach their children how to approach such cases. I also hope to warn other females out there to be aware of this uncle."

The Stomper's experience is not an isolated one.

Her encounter comes just one day after another woman shared how a man had touched himself on a bus while staring at her and her sisters. The 29-year-old man is currently assisting with police investigations.

In both cases, the victims reported feeling at a loss and not knowing what to do.