Yet another kopitiam fight -- this time at Jurong West 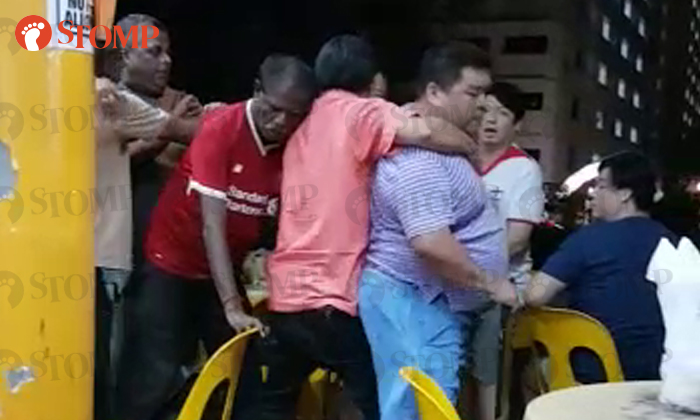 A dispute broke out between two men at a coffee shop at Jurong West Street 91 yesterday night (April 4), at around 10.40pm.

Stomper Eddy was at the scene and witnessed the altercation, which occurred at NTI Food Court, a kopitiam located at Block 964.

Eddy said the fight involved a customer and a man working at the coffee shop, though Stomp is unable to confirm this.

Stomp understands that the two men were friends.

He told Stomp: "The coffee shop boss had a heated argument with a customer.

"They started throwing tantrums at each other."

According to Eddy, one man was also "chased and tackled to the ground", though the Stomper did not manage to film it.

In a video contributed by Eddy, two men, one of whom was holding a tray, can be seen in a tussle while several others tried to separate them.

The man with the tray is later seen holding a chair, though someone else managed to pry it away from him.

Stomp understands that when police arrived at the scene, the fight had already stopped.

This is the latest incident in a string of fights that have occurred at coffee shops recently.

A bizarre fight took place in Hougang last weekend, during which a man hit a woman after she taunted him to.

Earlier in March, a group of men in their 60s fought over an auntie in Yishun.

And in February, a brawl broke out at People's Park Complex in Chinatown. A man was subsequently arrested for using criminal force against a public servant.