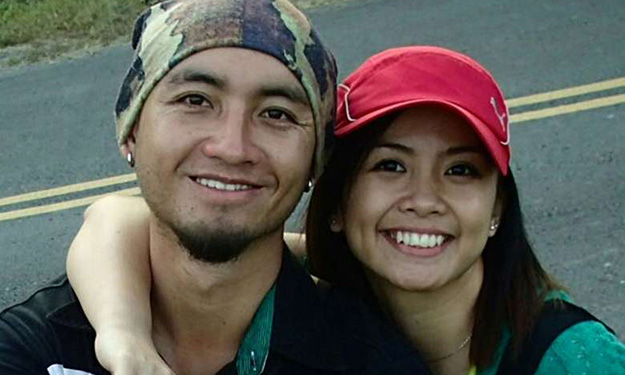 They had been due to marry last November. But for nurse Jessica Veronica Sikta, 26, that promise would never be fulfilled.

Her fiance, adventure trainer Valerian Joannes, was among those who died in the earthquake that struck Mount Kinabalu last June.

Ms Sikta, who still wears the engagement ring - a simple silver band - given to her by Mr Joannes, told The Sunday Times: "I can only imagine how life could be brighter with him, a caring, loving responsible future husband and father to our children.

"Even though it won't happen, it still brings a smile to my face just thinking about it."

Mr Joannes, who would have been 28 this year, was one of the five adventure trainers guiding the pupils through a Via Ferrata trail on June 5 last year when the quake hit, killing him and colleague Ricky Masirin.

Ms Sikta said: "It was the darkest day of my life. Even now, I still can't believe it happened."

As a nurse, she is trained to perform last offices but had Mr Joannes' family go ahead and handle the procedures. "I'd never have imagined doing it for my beloved fiance. It was a lot to handle," she said. For his final send-off, Mr Joannes was dressed in a white shirt - the one he wore during their engagement.

The couple, who were engaged in December 2014, knew each other when they were still teens in 2003. They met at the St Pius X Catholic Church in Bundu Tuhan, at the foothills of Mount Kinabalu. Mr Joannes was a drummer in the church band.

From best friends, they became lovers. "He taught me to be kind to others and forgiving towards another. He also taught me to love selflessly," she said. "I'm thankful for the love we shared."

Over the past year, Ms Sikta has found peace in reminiscing their tender moments together and devoting time to prayer. She also spends her weekend with her family and Mr Joannes' family.

"I miss his jokes. I miss him when he laughs at my jokes too," she said. "I miss the way we would just sit and discuss the future."

Mr Joannes was given a hero's send-off at his funeral, which was packed with mourners who came to pay their last respects.

The fallen adventure trainer, who worked with Mountain Torq that operates the Via Ferrata routes on Mount Kinabalu, had reportedly shielded the Tanjong Katong Primary School pupils from the falling rocks during the quake.

"He was my hero, and he proved to be our hero too," Ms Sikta said. To remember her fiance, she will be scaling Mount Kinabalu on the anniversary of the disaster to finish one of his unfulfilled requests.

"To share a moment together on top of Mount Kinabalu was one of the items on Valerian's wish list," said Ms Sikta, who hopes to visit the trek where Mr Joannes used to work and observe a moment of silence. 'I would like to complete his wish, even though it would only be me without him."

Get a copy of The Straits Times or go to straitstimes.com for more stories