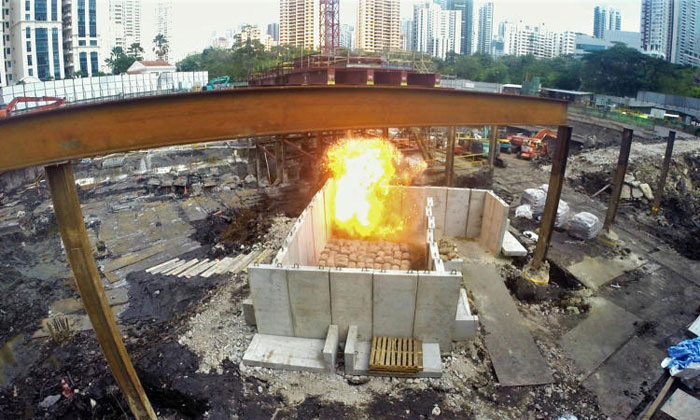 A World War II bomb relic found in the area around the former site of popular nightclub Zouk was successfully disposed of on Monday afternoon (Nov 18), after a hive of activity in the morning in preparation for a detonation operation.

Police said in an update on Facebook that the 50kg aerial bomb, found at a construction site in Jiak Kim Street last Tuesday, was disposed of at about 4.35pm.

The Building and Construction Authority, national water agency PUB, the Land Transport Authority and SP Group are now assessing the construction site, roads, nearby drains and pipelines, as well as vacated condominiums and a hotel for building and structural safety.

Roads around the area and a portion of the Singapore River remain closed.

Police advised the public to avoid the affected area until further notice and to refer to the police’s Facebook and Twitter accounts for more updates.

Earlier in the day, police, soldiers and residents of nearby condominiums and hotel guests prepared for the controlled detonation of the bomb by the Singapore Armed Forces Explosive Ordnance Disposal team.

An explosion from the detonation operation was heard at 11am.

Slight tremors were felt nearby and passers-by along the Singapore River said there was a smell of explosives in the air. Roads around the area near Kim Seng Road were also closed, with a 200m cordon set up during the operation.

Tourist Su Zhi Qing, 28, said he heard the first explosion from about 1km away from the site.

Mr Su, who is from China, said he was puzzled when he first saw the area around Jiak Kim Street cordoned off while he was on his way to Sentosa.

“I was a bit shocked but then I read about it on the news. I understand this happens quite rarely in Singapore,” he said.

At 7am, those living in condominiums near Jiak Kim Street were seen trickling out of their homes, following police instructions to vacate their units from 8am to 6pm.

About 600 residential units were affected, including those at the Tribeca by the Waterfront, Rivergate and Mirage Tower condominiums.

By about 7.50am, 10 minutes before all residents were evacuated, 20 to 30 police officers were seen on the ground. Affected roads around the area were closed to traffic by 9.30am.

The Straits Times understands that the bomb disposal unit was on site as early as 5am.

In anticipation of the controlled on-site detonation of the bomb, residents had been told by the police and their respective condominium managements last Saturday to keep their windows open to prevent them from shattering as a result of pressure differences.

A holding area, understood to be a school hall, was also set up in River Valley Primary School for those who did not have anywhere to go during the affected period.

At least 13 police vehicles and one Singapore Civil Defence Force fire engine were seen at the school.

By 12pm, there were fewer than 10 residents believed to be in the school.

Residents told ST on Monday morning that they had tweaked their schedules accordingly, although some remained apprehensive of the area’s safety even after the explosion.

Ms Saya Yuan, 25, who works in the health supplements industry, said she was checking in to a hotel for two nights, and would be moving out of the Tribeca condominium, where she currently lives, at the end of the month. 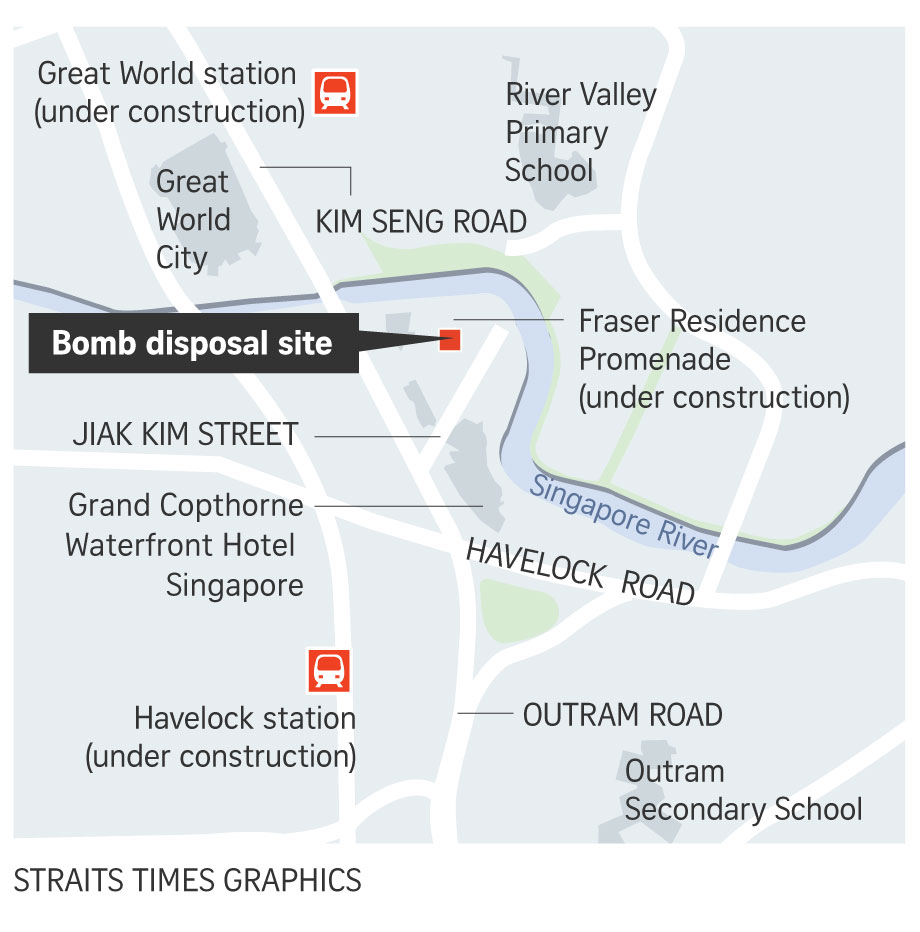 Pulling a luggage bag that she had packed overnight by her side, she said: “I know the authorities have it taken care of, but I’m still really worried that there will be remnants (of the bomb). I just have a weird feeling about it.

“Some of my friends actually flew overseas, what I’m doing is already less extreme.”

Some residents are less worried but have still taken precautions.

Housewife Margaret Thong, 48, another Tribeca resident, said she had sent her cat to a cat hotel for a few days to avoid unforeseen complications. She will spend Monday shopping instead, a disruption to her initial plans of spending time at home with her pet.

Her 11th-floor unit, which overlooks the construction site, gave her the perfect vantage point in the past week to check on developments, “keeping the bomb foremost in her mind”, she said.

Ms Jyotsna-Dash, a 74-year-old former teacher whose unit also overlooks the site, said she had been sending photos to her daughter in the United States daily on the bomb situation.

“My daughter has been asking for constant updates,” she said. “This is a minor inconvenience to me since I don’t really like leaving my house early in the morning, but I have no complaints since they told us two days in advance and we could make plans.”

Ms Aditi Krishnakumar, a Mirage Tower resident, decided not to send her three-year-old daughter to childcare on Monday, taking leave from her job at a hedge fund to take care of her instead.

The 35-year-old said: “We are going to go to the holding area for a short while because it is still too early in the morning to do anything.

“I might bring her to the library or visit some friends later but it definitely has changed my Monday plans.”

The Grand Copthorne Waterfront hotel, whose guests and staff were also asked to evacuate, said a limited number of its guests were affected, with some rooms facing the construction site out-of-bounds. Some 155 rooms out of a total of 574 rooms were vacated.

The hotel’s swimming pool and gym were also closed during the operation.

The Grand Copthorne Waterfront said it has increased security measures and is actively working with the police “to ensure the safety of all our guests and staff”.

Several tourists staying at the hotel were unperturbed, saying that they are used to such controlled explosions in the countries they are from.

A man in his 30s from Britain said it was “exciting” that his trip coincided with the event, and that he was “really surprised when I received the text message from (the Singapore Government) alerting me to the incident”.

“I’ve experienced it in the United Kingdom before, though, so I’m not too worried,” he said, as he booked a Grab car to leave the affected area.

ST understands a lounge area with refreshments was set up in the hotel for affected guests to rest, and that notices were placed in public areas of the hotel to keep guests updated on the situation.

King’s Centre and Waterfront Plaza, both located next to the hotel, are also helping the police with traffic management and logistics, redirecting members of the public when it is necessary.

“Loud sounds may be heard during the controlled on-site disposal of the war relic. The public is advised not to be alarmed,” the police said earlier.