Would you pay $42 for this meal of chicken fried rice, 'tiny octopuses and 90% cabbages'? 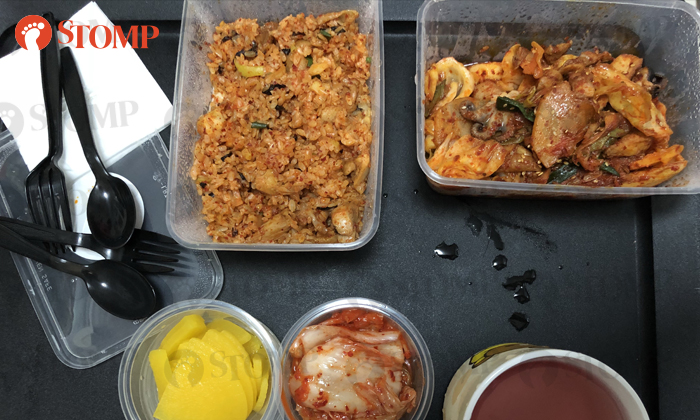 Stomper Homefoodie forked out $42 for a meal, consisting of two main Korean dishes, that was delivered to her home yesterday evening (Jan 15).

According to her, the food was from Korean restaurant Yoogane and the purchase was made via delivery service foodpanda.

The two dishes are marinated chicken fried rice which costs $15.94, and chicken galbi with chukkumi octopus that costs $23.43. The total of $39.37 is inclusive of GST.

There is also an additional delivery fee of $3, bringing the total bill to $42.37.

However, Homefoodie feels that the price of her chicken galbi with chukkumi ocotopus does not justify the portion that she received.

She told Stomp: "The serving for the chicken galbi with chukkumi octopus is ridiculous.

"We contacted foodpanda for verification, but an employee said she had contacted the restaurant, who claimed that this is the standard serving size.

"You can see from the photo, which was taken before eating, that it is pretty much $23 for 90% cabbages (and only one octopus, as you can see. The other two or three octopuses are as small as a twenty-cent coin).

"I have dined at Yoogane before and their portions are definitely different from this.

"It is extremely disappointing as in the end, we still had to cook instant noodles for dinner.

"Even $6-$8 Korean dishes at food courts give more meat than this!

"Diners, what do you think about this?"