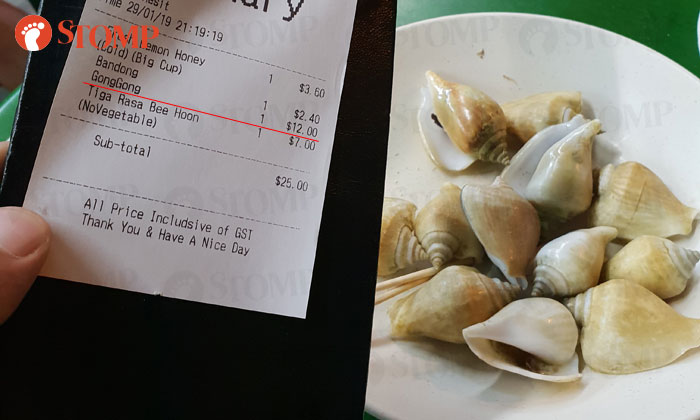 Stomper Nazreen was looking forward to the gong gong dish he ordered at Tang Tea House's Jalan Kayu branch on Tuesday night (Jan 30), but was sorely disappointed when it arrived at his table.

On his plate, he counted just 12 "small" sea snails.

"I was shocked," said Nazreen, who had visited the eatery for dinner with his wife.

"I ordered this gong gong for $12 and did not expect only 12 small pieces to arrive.

"That means one small gong gong is $1.

"The price is like eating at a fine dining restaurant!"

The sea snails Nazreen ordered were steamed and served with chilli.

The Stomper said he loves to eat gong gong and has found other places, including food centres at Newton and Pasir Panjang, charge around the same amount.

However, he said other eateries either give more snails or will serve bigger ones to make it worth the price tag.

He told Stomp that he gave his feedback to Tang Tea House and was stunned when told that this is the standard serving size.

"Usually gong gong sells for about $4 to $5 for 1kg at supermarkets," he said.

"This place selling small pieces for $1 each is the most expensive I've come across."