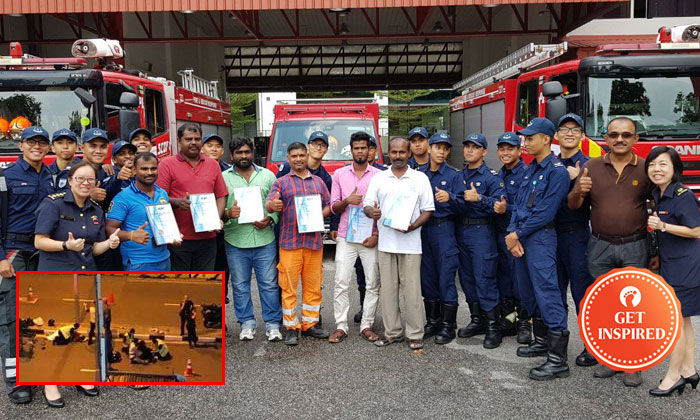 A group of foreign workers received Community First Responder Awards (CFRA) from the Singapore Civil Defence Force (SCDF) for rushing to the aid of victims of an accident that happened at Ang Mo Kio Avenue 4 on Mar 24.

In an earlier Stomp report, a man and a woman were sent to hospital after an accident involving their motorcycle and a car at the said location.

She was touched when she saw the construction workers rush from a nearby construction site to the scene and voluntarily set up traffic cones and use light sticks and signs to direct traffic away from the victims, ensuring their safety and that of other road users.

Their heroic efforts earned praises from netizens and local media.

"This is a very proud moment for us and we are truly touched!" said Mr Ramasami Vellaisami, one of the CFRA recipients.

"We were just doing our part and did not expect to get these awards and appreciation from so many Singaporeans."